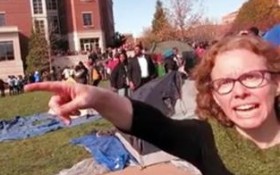 University of Missouri professor Melissa Click, 45, was charged with assault Monday for her alleged shoving and calling for “some muscle” to help remove videographer, Mark Schierbecker, from a Black Lives Matter (BLM) protest on the Columbia campus this fall.

But despite public outrage, Click continues to hold a job at the university — and she won’t be fired anytime soon.

The confrontation happened when protestors forced Schierbecker and other journalists away from a public area to create a so-called “Safe Space” for black students. Video of Click’s alleged assault on Schierbecker went viral, and he complained to university police.

An interim chancellor on Monday rebuffed demands for Click’s ouster, even in the wake of the criminal charges.

When asked about the prospect of Click being fired before her tenure process is completed later this year, Hank Foley, who oversees the four-school system’s campus in Columbia replied: “No. Not going to happen.”

“I’m all for due process, but it just seems like a broken system if an untenured professor can’t be fired for basic open-and-shut cases like this,” the senior from suburban St. Louis, who is majoring in German and history, said in a recent interview. “I’m just a little disappointed the city was faster to move on this than the university.”

A member of the university system’s governing curators renewed his call for Click’s firing Monday. David Steelman said the school placed a letter admonishment in Click’s employment file over the matter, but that doesn’t satisfy him.

“I’m willing to listen to the possibility of other job actions involving her as long as they’re serious,” Steelman, a Rolla attorney, said. “The whole situation surrounding this has been stonewalling and an attempt to run out the clock by the university” in hopes it fades from the limelight.

“Respecting students’ rights, free speech and safety has to be the No. 1 priority of any great university,” he said.