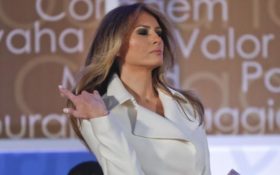 Newsweek has just shown how far they will go to drag the first family through the mud.

On Tuesday, the liberal news source was under heavy fire for spreading fake news about first lady Melania Trump ordering the removal of a 200-year-old tree on the White House lawn.

As it turns out, the United States National Arboretum recommended the removal of the dying tree, not Melania.

Newsweek has not been shy about their hatred for President Donald Trump, they have even compared him to murder Charles Manson–but to slander his wife is for removing a dead tree is going too far.

Twitter users were very angry with the suggestion that the first lady would ruthlessly cut down a historic tree.

I guess the #FakeNews media HAD to make up a story to smear our First Lady; her approval numbers are too high and she's beautiful. #FakeNewsweek #NewsweekHitJob

Does anyone still read that rag? https://t.co/RN4B8AA9nC

Hey @Newsweek please don’t write titles that make it sound like she is doing something terrible and arbitrary. Put simply: Do not use story titles that are misleading. It’s bad news. Sincerely, a concerned democrat. https://t.co/Betetaj5aX

They even slammed The Hill for falsely reporting on the same story, twice.

A White House official explained that Melania only made her decision to remove the dying tree after reviewing and assessing documentation provided to her.

“Mrs. Trump personally reviewed the reports from the United States National Arboretum and spoke at length with her staff about exploring every option before making the decision to remove a portion of the magnolia tree,” Trump’s communications director, Stephanie Grisham explained.

The documentation provided by specialists from the U.S. National Arboretum determined that the tree must be removed merely because it is “completely dependent on artificial support.”

“Without the extensive cabling system, the tree would have fallen years ago. Presently, and very concerning, the cabling system is failing on the east trunk, as a cable has pulled through the very thin layer of wood that remains. It is difficult to predict when and how many more will fail,” the documentation read.

Instead of chopping at the bit to attack the Trump family, the liberal media should do their research first.

After all, don’t they have anything better to report on other than a tree being removed from the White House lawn?