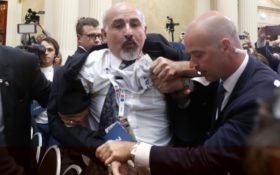 A liberal journalist-turned-protester was escorted out of a joint press conference between U.S. President Donald Trump and Russian President Vladimir Putin on Monday for disrupting the event.

Seated with the American press corps in Helsinki, the man held up a sign protesting nuclear weapons. He identified himself as a reporter and editor from the liberal magazine ‘The Nation.’

The incident is a sharp reminder to conservatives that it’s the media that continues to create the drama in the press, rather than report on actual news.

Fox Business Network reported that the man, identified as Sam Husseini, was heckling other reporters at the conference.

Watch as the protester removed from the conference —

A U.S. Secret Service agent spoke with the man, before Finnish security physically escorted him from the room minutes before the two presidents entered to begin their press conference.