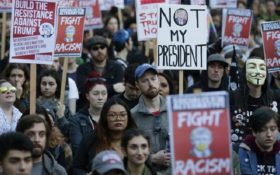 Liberals who harbor unbridled hate and violence against anyone who disagrees with them are growing bolder every day — and they’re starting to demand action.

One of the country’s largest liberal groups is Occupy Wall Street, an anti-capitalist organization that wants to force society into “income equality” (in other words, a “what’s yours is mine” universal welfare state).

Occupy Wall Street dislikes America’s reward-for-hard-work system, and call it selfish for not sharing money with loafers. Now, the anti-American group and other liberals are seeking to force government officials into compliance under threat of execution.

Before you dismiss that last sentence as over-the-top, allow me to draw attention to the latest liberal tweet.

That’s not a joke. Occupy Wall Street is calling for the killing of ICE agents for simply following laws on the books since President George W. Bush.

A new tweet from Occupy Wall Street reveals the ruthlessly violent murderers they actually are. Using explicit graphics that would be banned on any TV show, the group literally issued a manual on killing people representing the Trump administration.

The tweet tells 200,000 people what to do “if an ICE agent tries to take your child at the border.”

First of all, “pull your child away as quickly as possibly by force.” The picture shows a woman with a long knife holding it up against border agents, threatening cops trying to do their job.

Then, the drawn graphic tells the masses to “grab the ICE agent from behind and push your knife into his chest with an upward thrust, breaking through his sternum.” An explicit picture shows a woman literally murdering a man by stabbing him unawares from behind and twisting the huge knife up so as to instantly cause death.

“Reach into his chest and pull out his still beating heart,” the manual matter-of-factly dictates. The picture shows a woman fiercely thrusting her hand into the officer’s blood-soaked chest to grab his pumping heart.

“Hold his bloody heart out for all other agents to see,” the step-by-step Occupy Wall Street terrorist manual dictates. “Tell them that the same fate awaits them if they fuck with your child again.”

That’s right… the tweet actually instructs followers on how to murder law enforcement. That’s the kind of people liberals are. Fox News reported that the tweet was up for nearly a day before public outrage forced Occupy Wall Street to delete it.

But public statements like that is proof liberals have become ruthless hate mongers. Last year, liberal “funny girl” Kathy Griffin took back her apology for promoting the beheading of President Donald Trump — complete with her holding the president’s decapitated head, dripping with blood.

What is in the heart of liberals who even think of such things, let alone condone them? Slaughtering the leader of the free world like an animal? Terrorize the representative of democracy because you disagree with him? What mentally-deranged hatred is at the source of that tweet?

Even radical Islamic terrorists don’t dare broadcast what liberals get away with.

The terrorist who opened fire at the Christian Family Research Council — who shot a security guard and trying to slaughter as many Christians as possible — explained that the liberal “Southern Poverty Law Center” told him who to target.

James Hodgkinson went to a Washington D.C. politicians’ softball practice with multiple weapons and began shooting leaders, wounding and nearly killing U.S. Rep. Steve Scalise just last summer. Why? Because, as he he admitted, out-of-control liberals told him to.

This year at the G20 Summit, liberals ironically calling themselves “anti-fascists” blew up cars and injured over 200 police. At a Trump rally in Portland, Oregon, liberals belonging to the same group attacked officers with bombs and bricks.

Albert Eisenberg of The Philadelphia Inquirer commented on how liberals are increasingly trying to “shut down conservative voices with protests or riots.”

Last fall, five liberals were caught on camera mercilessly beating a law-abiding citizen who did not strike back, all at a hypocritically dubbed “Rally Against Hate” in Berkeley.

After calling United States Secretary of Homeland Security Kristjen Nielsen names in multiple tweets and saying she should be stripped “naked and whipped,” he lit up against White House Press Secretary Sarah Sanders and equated Presidential Adviser Stephen Miller to leading Nazis.

Using all caps to emphasize his serious urgency, Fonda opined that liberals should surround and harass Immigration agents’ families and children in their homes and in their schools. He concluded by writing, “WE SHOULD RIP BARRON TRUMP FROM HIS MOTHER’S ARMS AND PUT HIM IN A CAGE WITH PEDOPHILES.”

Even their highest elected leaders are guilty. Ultra-liberal Sen. Kamala Harris of California, a Hillary Clinton-mold presidential wannabe, actually made jokes on national television about personally assassinating President Trump or a member of his administration.

Fox News’ Tucker Carlson led a segment Thursday night accusing the Left of using unconscionable means to “silence debate” on immigration law. He said, “These guys are playing with fire,” and they ought to quit it.

“Something terrifying is going on,” Carlson broadcast in a tweet. The Left is “trying to destroy those in the way.”

The Fox News host commented against liberals, “You think any of these people care about family separation? If they did, they’d be upset about the collapse of the American family, which is measurable and real. They’re not. They welcome that collapse, because strong families are an impediment to their political power.”

One thing’s for sure: if anyone who saw the heinous Occupy Wall Street tweet perpetrates any violence against a government agent enforcing immigration law, that group of liberals is liable.