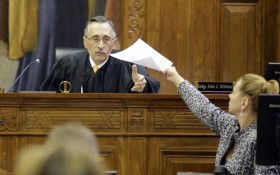 If the liberal courts can’t physically take the guns from American citizens, it looks like they’ll try to shut down the gun stores instead.

Jurors ordered a Wisconsin gun store to pay a whopping $6 million on Tuesday at the conclusion of a negligence lawsuit against Badger Guns, a shop in suburban Milwaukee.

The lawsuit said the shop sold a gun that was later used to shoot two officers, after the legal buyer turned around and illegally sold the gun to someone else. It’s called a straw purchase, and the ruling sets precedent that gun shops may be responsible for their customers’ actions.

Officer Bryan Norberg and former Officer Graham Kunisch were both shot after they stopped Julius Burton for riding his bike on the sidewalk in the summer of 2009. Investigators said Burton got the weapon, a Taurus .40-caliber handgun, a month before the confrontation, after giving $40 to another man, Jacob Collins, to make the purchase at the store in West Milwaukee.

Jurors ordered the store to pay Norberg $1.5 million, Kunisch $3.6 million and punitive damages of $730,000 because of Julius Burton’s actions.

Badger Guns, previously known as Badger Outdoors, has since closed.

Defense attorneys declined to comment after the verdict was read. The owners and operators of the gun shop weren’t in court to hear the verdict.

The liability issues raised in the case gained national attention when U.S. presidential candidate Hillary Clinton recently said she would push to repeal a George W. Bush-era gun law that shielded gun stores from such claims.

The gun shop’s attorneys denied wrongdoing. They said the owner of the store at the time of the gun sale, Adam Allan, couldn’t be held financially responsible for crimes connected to a weapon sold at his shop and that the clerk who sold the weapon didn’t intentionally commit a crime. Rather, they said Collins and Burton went out of their way to deceive the salesman.

Burton pleaded guilty to two counts of first-degree attempted intentional homicide and is serving an 80-year sentence. Collins, the man who purchased the gun, got a two-year sentence after pleading guilty to making a straw purchase for an underage buyer.