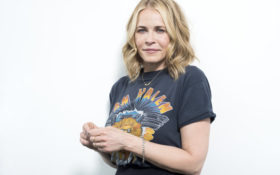 Liberal comedian and talk show host Chelsea Handler is being slammed as a hypocrite on Twitter following a tweet she posted on Sunday.

Handler said it would be nice if free speech was banned, and that there were laws in the United States to arrest people who make racist jokes.

2 Chinese guys were arrested in Berlin for making nazi salutes. Wouldn't it be nice 2 have laws here for people who think racism is funny?

She was referring to the two Chinese tourists who were arrested in Berlin for making the Nazi salute outside of the former German Parliament building. Nazi gestures and slogans have been illegal in Germany since 1945.

Sponsored: How to help reverse age-related vision loss by 82%

The hypocrisy is staggering. As savvy internet users were quick to point out, Handler makes racist jokes all the time!

Twitter was quick to call her out, posting pictures of some of Handler’s own racist jokes (including a Nazi joke).

So racist jokes are only funny when you make them? Everyone else should be arrested. pic.twitter.com/7nxLS5h1wV

So when are you turning yourself in? pic.twitter.com/9OiICjHgzf

Handler also took heat from Twitter users who reminded her that free speech is one of the things that make this country great.

In America, you can’t just arrest people for saying things you don’t like.

There was even a tweet condemning Handler’s nasty comments about First Lady Melania Trump, saying that she would never interview Melania because “she can barely speak English.”

Remember when you made fun of @FLOTUS because of her accent and heritage?

Should you be arrested? https://t.co/44HtbnLM27

The left is blatantly advocating for censorship to “protect” snowflakes from jokes they deem racist or bigoted.

Do we need to remind them of the First Amendment?

The “tolerant” liberals who support restriction of speech do not understand what they’re pushing for (think North Korea!). The great thing about America is that the government can’t decide what we are — and are not — allowed to say or think.

The point of good comedy is to push the boundaries and comment on society in a humorous way.

Think of the ancient jester in the King’s court; he was often the only person that could tell the king the truth, and would do so through shocking comedy.

Sometimes comedians use race to do that! Blaming others for her failing comedy career is transparent and desperate.

Handler is the host of the talk show “Chelsea,” and she is known for her intense hatred of President Donald Trump on her Twitter account.

So, Chelsea, if you really want those laws in America, are you willing to be the first one arrested?