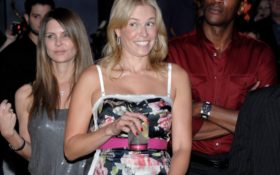 On her Netflix show “Chelsea” (which no one has ever heard of or watched), Handler calls Sanders a “whore.”

On a recent episode of her show, Handler sits down with Lanny Davis, the longtime Clinton family lawyer and fixer.

Davis began discussing Sanders, saying that she stands at the podium and “tells us that black is white.”

And that suddenly, prompts Handler to go on a vicious attack, “That harlot that they’re dressing up and trolloping out every day?” Handler said. “I mean, one day she has no makeup on at all, the next she has six-foot-long eyelashes, she’s got cleavage and summer whore lipstick all over her face. Can you believe what they turned her into? A proper trollop.”

Ironically, Handler claims to be a feminist–but why would a feminist attack another female? Does not seem right.

Handler again came under fire recently for tweeting a vile video of another women posing as Sanders.

Each step in the makeup tutorial comes with a disgusting joke relating to Sanders, the president, and his administration.

“I used to not know what foundation was, but our great president was kind enough to take me to a Sephora and he said to the employee, ‘Hey, you see that fellow over here? Make him a woman,” the fake Sanders says.

Glad to see how much of a strong feminist you are, by promoting positive body image of other females. @SarahHuckabee

Exactly. Those Liberals always preach, tolerance, acceptance, and inclusion…unless u don’t agree with them. Also preaching things like “fat shaming”, but here she is proving, once again, feminist are the biggest hypocrites on earth. They are everything they hate.

Actor James Woods also jumped in to defend Sanders and mock Handler for her hypocrisy.

It is pretty disturbing how this woman can allow a man to urinate on her, but then can go on to call another woman a “whore.” It’s the pot calling the kettle black!

During an interview with Fox & Friends, former Arkansas Governor Mike Huckabee was asked how he felt about Handler’s constant attacks on his daughter.

Why this “new chemotherapy” doesn’t require a prescription… [Sponsored]

He replied that he felt sorry for Handler because clearly she is a “angry” and “lonely” person.

These comments did not sit well with Handler, who took to Twitter to retaliate.

The truth is, Chelsea Handler is the real liar here.

Being a feminist does mean you support other women, and just because you do not agree with their political view points–does not mean you have a right to tear them down!

Handler needs to put her big girl panties on and take the blame for being a vicious and mean person.

Just because your president-elect did not win, does not mean you can attack the women that support the elected president.