Liberal comedian said WHAT about Ivanka Trump!? - The Horn News 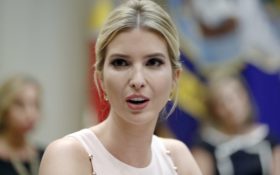 Unfunny liberal comedian Michelle Wolf caused an uproar in April after she attacked White House Press Secretary Sarah Huckabee Sanders over her appearance — and now she is back in the headlines for comparing first daughter Ivanka Trump to herpes.

Wolf’s controversial comments in April paled in comparison to her skit on Sunday’s episode of “The Break,” the comedian’s Netflix show.

With recent calls from Americans for “civility,” Wolf is clearing taking the opposite approach by attacking several members of the Trump administration on her recent episode of her Netflix show.

Wolf invoked late-night host Samantha Bee’s expletive Ivanka rant when stating, “You’re a c*** doesn’t hurt them, it’s on their vision board.” She instead called on liberals to attack conservatives with “life-altering words”.

She also took aim at Senator Mitch McConnell and EPA Administrator Scott Pruitt, but she unleashed her nastiest comments on Ivanka.

Wolf told viewers,“If you see Ivanka on the street, first call her ‘Tiffany.’ This will devastate her.”

“Then, talk to her in terms she will understand,” Wolf continued. “Say, ‘Ivanka, you’re like vaginal mesh. You were supposed to support women, but now you have blood all over you and you’re the center of a thousand lawsuits”

While on the verge of attacking Supreme Court Justice Clarence Thomas, Wolf took a break to harass Ivanka some more.

“Ivanka, you’re like that birth control pill Yaz, at first it seemed like it’d be really cool and helpful, but you need to be immediately recalled,” she said, stumbling on her words.

And as if she did not assault the first daughter enough, after criticizing Secretary of Education Betsy Devos, Wolf went right back to her abuse on Ivanka.

“Is your nickname herpes?” she asked Ivanka. “Because you’re not necessarily the most dangerous person in the administration but you’re very unpleasant, totally incurable and you always show up when we’re about to get f*****.”

Ironically, her 5-minute long skit of attacks was called “Mind Your Manners,” but clearly Wolf’s parents never taught her what manners really are.

In a recent interview with USA TODAY, Wolf explained that she planned to distinguish her show from the competitors by hitting topics they may not be hitting.

This loud-mouth so-called “comedian” still has not made a name for herself in the industry, but instead has only made headlines for every time she royally screws up… not the kind of publicity any comedian should want to have.