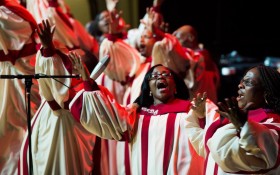 If you’re going to worship Christ, we demand you do so quietly. That seems to be the message the liberal leaders of the City of Oakland sent to the West Oakland’s Pleasant Grove Baptist Church. To drive the message home, the church could be hit with a $3,500 nuisance fee and $500 fines daily unless they quiet down their choir practice. But the church isn’t going to quiet down – in fact, they’re considering taking their choir practice outside!

The church, which has stood for 65 years, has never received a noise complaint before.

“Kind of hard to believe because we’ve been here about 65 years in the community and all of a sudden we get some concerns about the noise,” said Thomas A Harris III, the pastor of Pleasant Grove.

According to the letter sent to the church from the city, Pleasant Grove’s choir practice was a public nuisance.

The congregation says it was never consulted before the letter was received. But in response, they have some fun plans with local churches – local pastors have started thinking about coordinating some outdoor services, so that everyone in the city could enjoy the good word and their joyful noise that much more.

In the meantime, Pleasant Grove has announced plans to continue it’s choir practice as normal next Thursday.

Here’s what some residents were saying about the fines –

#Oakland wouldn’t fine the nightclub that shook my windows at 4AM, but they fine a Black church for worshiping? Oy. https://t.co/Hgpv1LvKWi

I went to Pleasant Grove over on Adeline St when I was a kid. Damn shame…reporting a CHURCH for noise. SMH https://t.co/q14sh8tovm — DeMarcus Davis (@DeMarcusRFNET) October 15, 2015