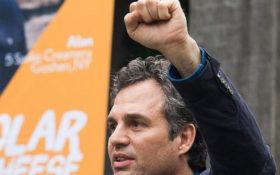 Just days before President Donald Trump’s State of the Union address, liberal Hollywood actors and directors have announced their plans to band together to upstage Trump’s speech with their own fake state of the union.

Folks, this is how completely out-of-touch Hollywood is. Celebrities like Mark Ruffalo, Michael Moore, Whoopi Goldberg, Rosie Perez, and Cynthia Nixon plan to host the People’s State of the Union. The goal of these libtards is to protest Trump’s agenda and to try and force Congress back into the hands of Democrats by demanding America watch them rattle off their uninformed opinions.

“In essence, it’s a better reflection of our state of the union based on a more populist point of view, based on the people’s point of view,” Ruffalo told People of the event.

Ruffalo is a self-proclaimed political activist actor that takes breaks from his rich and famous lifestyle to “fight for change.” Naturally, as a Hollywood elitest, he does not understand that his liberal views do not reflect the opinions of most Americans.

The event will be hosted by far-left organizations We Stand United, MoveOn.org Political Action, and Stand Up America. Comedian Wanda Sykes, actress Kathy Nahimy, singer Andra Day and rapper Common will also be featured at the event.

“I think it’s important because we have a president who has a difficult time with the truth, who has a radical, divisive agenda, and spends an enormous amount of time focusing on the negative and hopelessness and despair,” Ruffalo said.

This ticketed event will take place in New York City and will also be streamed online Monday night. It will be just another chance for liberal celebrities to take money from less fortunate Americans than themselves.

Do you agree with this movement?

Do you agree with the People's State of the Union?