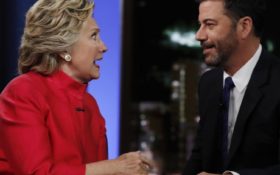 ABC’s late-night comic Jimmy Kimmel slapped conservatives across the country in the face by saying they’re not smart enough to do his job last week. And it’s already hitting the know-it-all celeb where it hurts: His wallet.

The “comic” trashed conservatives on the left-wing podcast called “Pod Save America,” which is hosted by former Obama administration officials.

“It just so happens that almost every talk show host is a liberal,” he said, “and that’s because it requires a level of intelligence.”

“It just so happens that almost every talk show host is a liberal and that’s because it requires a level of intelligence” – @jimmykimmel @PodSaveAmerica live pic.twitter.com/yNKbpzVNUp

“Not a tremendous amount of intelligence,” he continued, as the leftist elites in the audience roared and laughed at Middle America. “But you do have to be over the baseline.”

Yeah, Jimmy, conservatives obviously don’t have the intelligence to read jokes off cue cards and ask celebrities questions that their producers wrote for them.

When conservatives fired back at his snobby comments, one of the podcast hosts – former Obama speechwriter Jon Favreau – said they were too stupid and fragile to handle a joke —

He was of course kidding when he said it, which the entire room got right away.

No bigger snowflakes than the crowd that yells about snowflakes. https://t.co/AeppIary7H

Unfortunately, science doesn’t help them. One study tried to find out whether conservatives or liberals are more intelligent. Sociologist Markus Kemmelmeier looked at their SAT and ACT scores and found… mixed results.

Liberals have one mental trait conservatives don’t: The American Journal of Political Science found that liberals are more likely to be psychotic than conservatives.

But Republicans are more likely to be unemployed in the entertainment industry.

Tinseltown’s Republicans exposed why everyone in Hollywood is a liberal: If they don’t follow the party line, they’ll be blacklisted by the studio’s Democratic powerbrokers.

Tim Allen let the cat out of the bag last year on “Jimmy Kimmel Live!”

His show got yanked off the air even though it earned “impressive” ratings, according to the Hollywood Reporter.

But he’s a conservative – a deplorable – so his show was history?

“You get beat up if don’t believe what everybody believes,” Allen said.  “This is like ’30s Germany.”

As far as Hollywood is concerned, “There is nothing more dangerous… than a funny, likable conservative character.”

Kimmel is a left-winger who thinks he’s smarter than half of America. So, he’s safe.

ABC still pays him $15 million a year for hosting his show, not counting extra gigs like the Oscars.

He’s so fearless than he told the podcast, “I don’t mind” losing viewers.

“If they’re so turned off by my opinion on health care and gun violence, then – I don’t know – I probably wouldn’t want to have a conversation with them, anyway,” Kimmel said.

“Not good riddance, but… riddance,” he said.

Kimmel won the bronze medal in a three-way race again. He’s way behind Jimmy Fallon, and his audience has 1.5 million fewer viewers than Stephen Colbert’s.

Kimmel’s just another out-of-touch elitist putting down the people who pay his bills.

That doesn’t seem very smart to me.