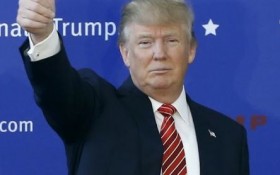 Five people were arrested, two police officers were injured, and at least one policeman needed stitches to close a head wound after a well-organized, violent protest at a rally for Republican presidential frontrunner Donald Trump last Friday.

The left-wing radicals groups behind it hoped to embarrass Trump and make him look too extreme for voters to support him on the eve of the Illinois primary.

A new poll found that twice as many people said the Chicago confrontation made them more likely to vote for Trump than to shy away from him.

Pollsters at Monmouth University reported that likely voters “interviewed on Saturday and Sunday were asked how that incident affected their vote intentions. Most (66%) say it had no impact on their support.”

“However, twice as many said it made them more likely (22%) rather than less likely (11%) to support Trump,” they wrote.

The scenes of blood and violence turned off so many people that nearly one in every four was more likely to vote for Trump out of spite.

As usual, Donald Trump understood the way voters would react better than his critics.

After the riot, he told MSNBC, “This increases the vote for Trump.”

He went on to win the Illinois primary on Tuesday by more than 122,000 votes and Florida by double digits.

It’s not just left-wing social groups that appear to be suffering in the court of public opinion from attacks on the Trump campaign, either.

“The three trailing candidates all called out the frontrunner after violence broke out at a planned Trump rally in Chicago Friday night,” Monmouth noted.

Establishment politicians in both parties, and their Wall Street donors, seem so threatened by Trump’s meteoric rise that they tried to pin the blame for the radicals’ rampage on his brusque style — only to see their accusations backfire at the polls.

That inspired backlash from voters like Jace Conners, who wrote on Cruz’s Facebook page, “Ted Cruz, I was an undecided voter who was leaning your way. Then you blamed Trump for the actions of violent protesters.”

“I am now voting Trump,” he wrote. “Thanks for helping me make my choice tonight.”