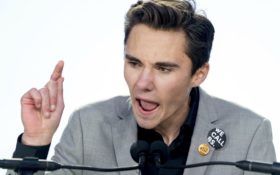 Gun control activist David Hogg insinuated on Sunday that President Donald Trump is going to cancel the 2020 presidential election — and Twitter users had a field day trolling the insane fantasy.

“These Midterms could be the last election of our lifetime. VOTE,” Hogg wrote on Twitter.

These Midterms could be the last election of our lifetime. VOTE

There is no logical reason behind why Hogg thinks this will be the last election of our lifetime, but critics pointed a Washington Post poll that came out a year ago that had a majority of Republicans stating they would support Trump is he were to say that the “2020 presidential election should be postponed until the country can make sure that only eligible American citizens can vote.”

Not once has there been any indication that Trump has plans to cancel the 2020 — nor does he have the power to do so.

Dude, you aren't old enough to be lecturing. You need to listen and learn. Obviously, you have a lot to learn. But youth is so cute.

A little dramatic, don’t you think?

One Twitter user even told Hogg that he would “be praying for” him.

David instead of conspiring against your fellow Americans , why don’t you take your energy and spread REAL American history to your peers. Lot of hate in your soul . I’ll be praying for you.

With outrageous tweets like Hogg’s it is no wonder that more, and more Democrats are choosing to #WalkAway from the party.