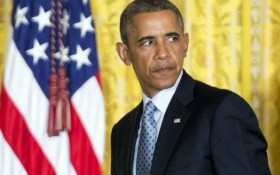 Conservatives warned time and again that government interference in healthcare would be bad for the market and drive up prices. Despite these protests from the right, Obamacare was pushed into law.

Now, President Obama is desperate to cover-up the truth, and recently claimed in a press release that health care premiums only increased 1.1% in the year ending in August.

This news from the Obama administration, however, seems to be a direct contradiction to what numerous news agencies are reporting. Everything conservatives warned about the program is coming true (yes, even the infamous ‘death panels’).

Reports indicate that in the past two years, the price of health insurance for consumers has risen at an alarming rate.

And it’s only going to get worse.

Across the United States, those on Obamacare will see their insurance premium rates go up an average of 7.5 percent for 2016. Depending on where you live, the increases could be even more substantial.

In Alaska and Oklahoma, premiums will increase 25 percent and 36 percent, respectively, in 2016.

And healthcare consumers in Albuquerque, NM and Charlotte, NC, will see their premium prices for 2016 rise 15 percent.

Much of the cost is attributed to costly new regulations. Pharmaceutical companies and insurance providers are passing those expenses directly on to customers.

In order to maintain their profitability, major health insurers have also started merging, which is limiting consumer choice and making cost control difficult.

Worse still, almost half of the government-subsidized health insurance cooperatives have already closed, and more will likely follow soon.

Health insurance cooperatives were originally formed to act as an alternative to private insurers by providing health insurance to poor and low-income Americans. Each co-op received 15-year loans from the federal government with favorable rates, but recent federal cuts have hurt these co-ops’ bottom lines.

On October 1 of this year, the Obama administration announced that loan repayments from the co-ops was lagging, leading to $900 million in taxpayer funds lost.

Medicare has also announced it will pay doctors to help patients in the long-anticipated “death panels,” or advanced care planning, that were intended to be included in the 2010 Affordable Care Act bill. Due to public concerns about encouraging euthanasia and deciding which Americans were “worthy of medical care” at the end of their lives, the provision was initially removed.

Now it’s back, and the advanced care planning will provide patients an unlimited number of counseling sessions to determine their preferred care at end of life — including possible euthanasia in certain states.

The panels were revived last summer and will take effect Jan. 1.

Aimee Pointee is an Editor for The Horn News