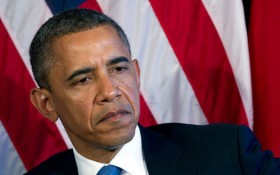 President Barack Obama’s administration announced Tuesday that the United States is retooling its strategy in Iraq and Syria and would conduct “direct action on the ground” against the terror organization ISIS in Iraq and Syria.

But according to multiple sources, there’s nothing new about this policy. Obama has been secretly ordering US troops to engage on the ground for months, and he’s just now admitting it.

And his orders may have even been illegal.

“The War Powers Resolution of 1973 gave President Obama 60 days to gain consent from Congress and required him to end ‘hostilities’ within 30 days if he failed to do so,” Ackerman said.

And even though the 90-day clock expired last year, the US has conducted special operations raids in Syria and participated in illegal ground operations for months in both northern Iraq and Syria. One of those raids, just last week, resulted in the first US combat death in Iraq since 2011.

And former Congressman Ron Paul, in a recent op-ed, said he also believes that current military operations in Syria are illegal.

Defense Secretary Ash Carter refuses to say under what circumstances the US might conduct more ground action.

“We won’t hold back from supporting capable partners in opportunistic attacks against ISIL, or conducting such missions directly, whether by strikes from the air or direct action on the ground,” Carter said, using an alternative acronym for the militant group.

Republicans have harshly criticized the Obama administration’s strategy in Syria and Iraq, where ISIS militants have captured large swaths of territory.

Among other options being considered is providing close-air support for Iraqi ground forces with Apache helicopters or other aircraft, and embedding US military advisers with smaller Iraqi units, thus placing the Americans closer to the front lines. That’s according to defense officials who spoke on condition of anonymity to discuss internal deliberations.