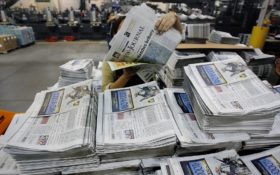 Steve Dunleavy, a legendary reporter and columnist for The New York Post who helped define the tabloid’s modern style, died. He was 81.

The Post reported that Dunleavy died at his home on Long Island on Monday night.

“Steve Dunleavy was one of the greatest reporters of all time,” said Post owner Rupert Murdoch.

“Whether competing with his own father in the famous Sydney, Australia, tabloid wars, or over the last 40 years in New York, Steve’s life story is littered with great scoops. He was much loved by both his colleagues and editors.”

“His passing is the end of a great era,” Murdoch said.

Dunleavy was born in Sydney, Australia, and began his journalism career at The Sun, where his father worked as a photographer.

He did stints at a variety of newspapers, including The Daily Mirror and The South China Morning Post, before arriving in New York City in 1966.

“Murdoch hired Dunleavy in 1967 to write stories for his papers in Australia and Britain, then tapped him as news editor of the National Star tabloid, which Murdoch launched in 1974,” The Post reported.

“At the Star, Dunleavy also wrote a column titled ‘This I Believe’ that so impressed the far-right John Birch Society that it named him its ‘American of the Year’” — despite the fact that he wasn’t a citizen.”

He eventually joined The New York Post in 1977 shortly after Murdoch bought the tabloid.

The epitome of a hard-charging, hard-drinking tabloid reporter, Dunleavy earned one of his better-known scoops by sneaking into a hospital dressed in clothes that looked like hospital scrubs to interview the family of one of “Son of Sam” serial killer David Berkowitz’s victims.

Dunleavy, who retired in 2008, was known as a staunch defender of the city’s police officers. He also wrote several columns championing Wayne Dumond, a decorated Vietnam-era veteran who had been convicted in Arkansas of raping a third cousin of former President Bill Clinton. Dumond was paroled and later convicted of murder.

Dunleavy spent so much time at a bar across the street from The Post’s offices that the tavern, Langan’s Bar & Restaurant, installed a shrine with a frosted-glass portrait of Dunleavy.

The owner gave the portrait to The Post when the bar closed last year.