Barber: You can’t fire me for being blind! Judge agrees, awards him HOW MUCH!? - The Horn News 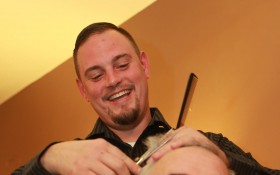 A legally blind barber was awarded $100,000 by a Massachusetts commission against discrimination after it says he was wrongly fired.

The Boston Herald reported Saturday that Joel Nixon had been working for Tony’s Barber Shop in Norton for a year before his boss discovered his condition.

The 29-year-old has retinitis pigmentosa, which affects his peripheral vision and makes it hard for him to see at night. He’s been declared legally blind by the Massachusetts Commission for the Blind, and Nixon said there’s a possibility he may lose his sight forever.

“I could wake up someday and be completely blind, but my goal is to have a nice home with a nice backyard for my son,” a tearful Nixon told the Herald. “I’ve never been to Disneyland, and I want to take him. I want to take him before I lose my vision. I’m trying to do the best I can.”

But Nixon said it hasn’t affected his work. Barber shop owner Tony Morales fired him in 2012 after he tripped over a customer’s legs and then later that day tripped over a chair in the waiting room, Nixon said.

Morales disputes Nixon’s account, saying Nixon wasn’t a licensed barber and simply wasn’t pulling his weight in the shop. “It’s a bunch of lies,” he told the Herald. “All of this is false accusations.”

Morales said he plans to appeal the state’s Friday decision, which awarded Nixon $75,000 in lost wages and $25,000 for emotional distress.

Nixon said after his firing, he struggled to find employment, saw his condo go into foreclosure and was forced to apply for food stamps and appeal to charities for Christmas gifts for his family.

He said he’s still cutting hair for loyal customers — who call him the “Blind Barber.”