Lawsuit says, “You can’t fire my stinky husband for passing too much gas!” - The Horn News 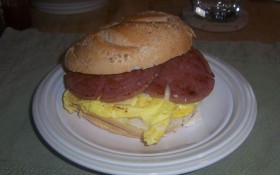 We imagine getting sued stinks… but talk about airing your dirty laundry! The Associated Press is reporting that one of New Jersey’s top pork roll makers is being sued by the wife of an employee. The lawsuit says the employee was fired for passing too much gas in the office… and you can’t do that!

The Home News Tribune reports that Louann Clem says in the lawsuit that her husband suffered serious consequences from gastric bypass surgery. Those included extreme gas and uncontrollable diarrhea.

The lawsuit alleges that Case Pork Roll Co. President Thomas Dolan complained about the side effects and told Rich Clem to work from home because he made the office smell. His wife also worked there.

But owner Tom Grieb says neither of them was fired. He says business wasn’t good and they didn’t want to take a pay cut and walked out.