Lawsuit demands US Passports include "Other" gender option - The Horn News 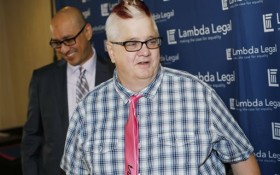 There will be a new gender option for US passports if this Colorado resident has anything to say about it.

Dana Zzyym (pronounced Zimm) was denied a passport for refusing to identify as either male or female on the application form. He then sued the federal government to try to force the United States to join a handful of other countries that allow people to get travel documents without picking a gender.

Lambda Legal announced the lawsuit Monday on behalf of Zzyym, who was born with ambiguous sex characteristics — referred to as intersex. It names Secretary of State John Kerry as a defendant and claims that requiring people to check a box marked either “M” or “F” is discriminatory and asks people like Zzyym to lie.

Countries including Australia, New Zealand and Nepal allow people to have their gender marked as “X” or “other” rather than male or female on passports.

One of Zzyym’s lawyers, Paul Castillo, said people with such foreign travel documents are permitted to enter the United States, and he suggested that federal officials also allow an “x” option on its passport applications.

Ashley Garrigus, a spokeswoman for the State Department’s Bureau of Consular Affairs, said the department would not comment on pending litigation.

Lambda Legal previously joined other groups in pressing the State Department to change its passport policy for transgender people. Since 2010, people who undergo gender reassignment surgery have been able to change the gender on their passport with certification from a doctor.

Castillo said there is no gender listed on Zzyym’s birth certificate. Zzyym’s parents raised their child as a boy, when Zzyym underwent some medical procedures to change characteristics. Zzyym later served in the U.S. Navy as a man before identifying as intersex while working and studying at Colorado State University.