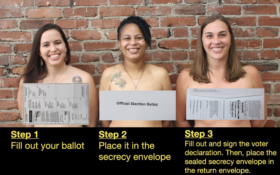 You’ve heard it by now that the debate surrounding mail-in ballots is heating up.

Well, apparently the conversation is getting so hot that lawmakers have started taking their clothes off …

A small group of female politicians out of Pennsylvania have led an effort to raise awareness against proper ballot practices –– by going topless.

The global pandemic has thrown 2020 voting into disarray and each state has its own individual requirements and specifications for how to vote, leaving many Americans across the country very confused.

“Desperate times call for desperate measures!” tweeted Allegheny County councilwoman Bethany Hallam. “So your favorite elected officials got naked so that you remember to make sure that your mail-in ballot is NOT submitted without its secrecy envelope!”

Hallam claims the idea first started when she pitched the idea to her fellow constituents, suggesting they “get naked to try to save our democracy.’” Hallam is depicted below, alongside fellow councilwomen Olivia “Liv” Bennett and Democratic state House candidate Emily Kinkead, reports People.

Desperate times call for desperate measures! So your favorite elected officials got naked so that you remember to make sure that your mail-in ballot is NOT submitted without its secrecy envelope!! #nonakedballots #dressyourballot pic.twitter.com/bQXaQRHj0j

Lawmakers are rallying around the initiative in lieu of “naked ballots” — a slang term used for mail-in ballots placed in the mailbox without a proper envelope.

The advertisement was released on the heels of the Pennsylvania Supreme Court’s decision to discard ballots not properly sealed.

Experts say that could threaten up to 100,000 votes in the critical swing state.

The impact could be detrimental should lots ofvoters fail to fill out ballots properly. Many lawmakers across the nation have tried to warn Americans about the threat of both voter misinformation and disinformation, which could throw the election into even more trouble than it already contends to be.

“No one wants a naked politician—or a naked ballot!” Kinkead wrote.

No one wants a naked politician – or a naked ballot! Don't forget your secrecy envelope when you mail in your ballot. #NoNakedBallots #DressYourBallot @bethanyhallam @LivFor13 pic.twitter.com/wXInsC77Q4

“Don’t forget your secrecy envelope when you mail in your ballot.”