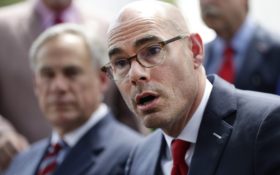 Texas’ embattled GOP House speaker announced Tuesday that he won’t seek re-election after a growing number of Republicans called for his resignation following the release of a secretly recorded conversation in which he sought help to oust members of his own caucus in 2020 and used foul language to disparage Democrats.

The decision by Texas House Speaker Dennis Bonnen comes less than a week after the release of the hourlong tape that sparked among the biggest political scandal in the state in years. Bonnen’s retreat puts Republicans’ fragile dominance of the state Legislature further at stake.

“After much prayer, consultation, and thoughtful consideration with my family, it is clear that I can no longer seek re-election as State Representative of District 25, and subsequently, as Speaker of the House,” Bonnen said in a statement that included a list of 43 House Republicans calling for him to step down.

Though he will not seek re-election in 2020, Bonnen of Angleton, Texas, will serve the rest of his first term as House speaker.

The Texas Legislature won’t meet again until 2021, when lawmakers will redraw voting maps and political control of the House and Senate will be critical. Heading into 2020, Democrats can grab a majority if they flip nine seats in the lower chamber.

The secretly recorded June meeting between Bonnen and the head of a conservative group called Empower Texans is at the center of an ongoing state police investigation. The lobbying group often criticizes Republicans it feels aren’t conservative enough on issues such as spending, abortion and guns,

Bonnen can be heard asking for the help of Empower Texans CEO Michael Quinn Sullivan in targeting several Republican incumbents in primaries next year. He also suggests he can provide a news affiliate of Empower Texans with media credentials for access to the House floor in exchange for the group’s help.

Bonnen sought to drive out moderate GOP members who he believed stood in the way of his agenda, and he used crude language while discussing freshman Democrats whose midterm victories in 2018 weakened the GOP’s House majority.

“Jon Rosenthal makes my skin crawl. He’s a piece of (expletive),” Bonnen said in the recording. He refers to Michelle Beckley as “vile.”

Republican Gov. Greg Abbott, who remained largely silent after the tape was released, thanked Bonnen in for his work but did not comment directly on the scandal.

“Looking ahead to 2020, the Republican Party of Texas must unite and work together to retain a majority in the Texas House,” Abbott said in a statement. “To that cause, I am redoubling my efforts to ensure we achieve that goal.”

Five top House Republicans released a statement Monday night stating they no longer supported Bonnen. “It is clear that trust and confidence in the Speaker has significantly eroded among our membership, and the matter has both damaged the reputation of the House and relationships among individual members,” they said.

The Texas Republican Caucus condemned Bonnen’s remarks in a statement released on Friday.

Texas Democratic Party Chair Gilberto Hinojosa said in a statement that Bonnen’s decision not to seek re-election was a victory for transparency and accountability.

“Texans are tired of politicians, like Republican Speaker Bonnen, who use backroom deals, cover-ups and outright lies to pursue power over everything,” Hinojosa said.

Sponsored: Leaked! HillaryLOSES it on camera [footage inside]