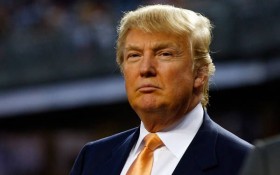 A Democratic PAC run by a Latino activist is furious that NBC has invited billionaire presidential candidate Donald Trump to host NBC’s “Saturday Night Live” this weekend, and is offering a bounty to anyone who will help silence the bombastic billionaire.

The Federal Election Commission-registered DeportRacism.com is offering a $5,000 reward to anyone who interferes with the live broadcast by yelling “deport racism” or “Trump is a racist.”

Progressive activists continue to mount pressure on NBC to cancel Donald Trump’s guest-host appearance on this weekend’s “SNL” in other ways as well. Recently, a coalition of advocacy groups delivered petitions that claim 522,000 signers to the network, calling for Trump to be dropped from the show.

The petitions were delivered to 30 Rockefeller Plaza, home of NBC and “Saturday Night Live”.

In advance of the show, NBC released promotional spots featuring Trump that included one in which he refers to a Republican opponent, Ben Carson, as “a complete and total loser.”

Trump drew fire early in his campaign when, as the billionaire developer announced his candidacy, he described some Mexicans who are in the United States illegally as criminals and rapists.

Trump has played a major role in delivering record-breaking ratings to the first three Republican debates and has been a sought-after guest on talk shows and newscasts.

Asked about the opposition to his upcoming appearance while promoting his new book in New York on Tuesday, Trump said he was pleased to hear demonstrations were already underway.

“Look, I think they should demonstrate” he said. “Ratings will go even higher than they are going to be. It’s going to be one of their highest-rated shows ever and they’re very excited about it.”

Asked specifically about the petition, he said: “It’s only going to make it hotter.”

Trump also repeated his frequent assertion that he has great relationship with Hispanics, with tens of thousands working for him over the years, he said.

Saturday’s appearance will be an “SNL” encore for Trump, who first hosted the show in April 2004, long before his entry into politics, as the breakout star of NBC’s new competition show “The Apprentice.”

“Nobody gets ratings like me,” Trump said on his “SNL” appearance.

He went on to say that initially he was asked to do a single sketch on Saturday’s show. Then “SNL” executive producer Lorne Michaels had second thoughts and asked Trump if he would host the entire 90-minute program. “And I said, ‘You know what? I would.’ Because it’s an honor.”