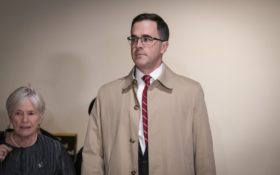 The Latest on President Donald Trump and the House impeachment inquiry (all times local):

A former top White House aide told members of Congress he had concerns that a record of President Donald Trump’s call with the president of Ukraine would leak. But the aide said he didn’t have concerns that Trump’s request for investigations into a political rival was illegal.

Tim Morrison told lawmakers Thursday: “I want to be clear: I was not concerned that anything illegal was discussed.”

Morrison was until Wednesday a top national security council official on Russia and Ukraine. In his opening statement, obtained by The Associated Press, Morrison says he was concerned that if the call was leaked that it would affect bipartisan military assistance to Ukraine.

Morrison’s testimony corroborates that of other witnesses who raised concerns about a parallel foreign policy process with respect to Ukraine led by President Donald Trump’s personal attorney, Rudy Giuliani.

A former top national security adviser to President Donald Trump has arrived on Capitol Hill to testify in the House impeachment inquiry.

Tim Morrison handled Russian and European affairs at the White House’s National Security Council before resigning his position a day before Thursday’s hearing.

The impeachment inquiry is focused on Trump’s effort to have Ukraine investigate Democrats and a potential 2020 rival, Joe Biden, while the administration was withholding military aid to the Eastern European ally.

It’s illegal to seek or receive foreign help in U.S. elections. Trump says he did nothing wrong.

House investigators expect to hear from the man who until recently was President Donald Trump’s top adviser for Russian and European affairs.

Tim Morrison had been with the National Security Council until leaving his post the day before his scheduled testimony in the House impeachment inquiry.

Morrison is expected to be asked Thursday to explain that “sinking feeling” he described to a colleague when Trump demanded that Ukraine investigate Joe Biden and meddling in the 2016 election.

He was brought on board to address arms control matters and shifted into advising on Russia and Europe. In that role he stepped into the thick of an in-house squabble about the activities of Trump’s personal attorney, Rudy Giuliani, who had been conversing with Ukrainian leaders outside of traditional U.S. diplomatic circles.