At last night’s debate, Trump said… WHAT!? - The Horn News 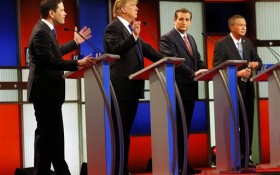 It was a bitter fight from the beginning, and the exchanges made television history – literally – when billionaire Donald Trump became the first ever presidential candidate to make reference to his… erm… ‘size’ on television.

Responding to an attack by Rubio regarding the size of his hands, Trump shocked the world.

“Look at those hands, are they small hands?” the GOP frontrunner said, holding them up for viewers to see.

“And, he referred to my hands — ‘if they’re small, something else must be small.’ Well, I guarantee you there’s no problem. I guarantee,” said Trump.

Donald Trump was under fire even before taking the debate stage Thursday night.

The Republican front-runner walked into the Fox Theater after being targeted for much of the day by the GOP’s last two presidential nominees, who warned voters across the nation that Trump must be stopped.

His three rivals — Marco Rubio, Ted Cruz and John Kasich — set out to keep Trump on his heels on what they hope will be remembered as a pivotal day in the 2016 contest. Knowing he would be attacked, Trump warned voters ahead of time that his tone might have to be less-than-presidential.

Here are some takeaways from the 11th Republican presidential debate of the 2016 campaign:

THE DONALD STRIKES BACK

There was only the one reference to Trump’s sexual prowess, but he directed many other insults at his rivals.

They were the kind of blunt attacks his supporters love. But they could lead undecided voters to think twice in the primary contests to come — and November’s general election.

After all, it’s hard to imagine a sitting president making a joke in public about, well, you know.

Trump doesn’t often talk policy details. We may have found out why.

The front-runner reversed a position posted on his website about visas for high-skilled immigrants and opened the door to a broader shift on immigration when pressed to explain a private conversation with The New York Times.

Having embraced tough immigration rhetoric for much of the last year, Trump said the next president needed “flexibility” and “a little give and take” on the issue. He praised Rubio’s past willingness to embrace compromise on immigration, even though Rubio’s position has been widely condemned by conservatives.

The tone and content of Trump’s message prompted the moderator to cite a Trump negotiating tactic, outlined in his book, which suggests scoring points by playing to people’s fantasies.

“I’m not playing to anybody’s fantasies,” an irritated Trump replied.

Yet his inconsistencies on various issues were highlighted time and time again throughout the night. They included his shifts on Afghanistan, Syrian refugees and former President George W. Bush’s honesty. As he did on immigration, he often responded by citing the need for flexibility.

Rubio and Cruz paid little attention to each other, spending most of the night instead attacking Trump.

While Rubio was the leading Trump aggressor early on, Cruz took shots, too. The Texas senator played the part of a condescending parent multiple times, first ordering an angry Trump to “Count to 10,” and later telling the front-runner to “breathe, breathe, breathe. I know it’s hard.”

Trump seemed at a loss for words on both occasions.

Rubio repeatedly tried to expose Trump’s lack of specificity on policy and seized on Trump’s unwillingness to refund tuition to many people who paid thousands of dollars to attend Trump University. Trump is having to defend the school in a class-action lawsuit.

LOYALTY TO THE NOMINEE

As a growing number of leading Republicans vow never to support Trump, the billionaire’s rivals went the other way.

Each was asked in the debate’s final moment whether he’d support the party’s nominee, even if it were the billionaire businessman. And each responded in the affirmative — even Rubio, who has been Trump’s leading attacker in recent days.

The loyalty pledges could undercut the #nevertrump movement started by his Republican foes on Twitter.

But it’s hard to imagine leading Republicans, such as Mitt Romney and Nebraska Sen. Ben Sasse, suddenly making an about-face on the point after casting Trump in recent days as dangerous and woefully unprepared to lead the nation.

Kasich again played the adult in the room. He has adopted the strategy in virtually every debate so far, but on a night that was among the messiest to date, his unwillingness to sling mud was remarkable.

His focus on substance allowed him to stand out when the debate turned to the federal deficit and national security, two key issues on which he has years of experience. He scored a big applause at one point by declaring, “Let’s stop fighting!”

Yet Kasich also conceded that he has a narrow path to the nomination. He noted he’s not the only one, when asked about adopting a strategy that depends upon a contested convention in July to win: “We’re all really there,” he said.

He’s probably right — with the exception of Trump, of course.