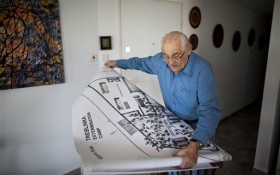 The death of 93-year-old Holocaust survivor Samuel Willenberg marks the passing of the last known link to the notorious death camp of Treblinka, perhaps the most vivid example of Nazi Germany’s attempt to destroy European Jewry.

But the death of Willenberg, who was buried Monday, also symbolizes a looming transition in the field of Holocaust commemoration, as historians and educators prepare for a world without survivors and the challenge of maintaining the memory of the Nazi genocide without the aid of those who witnessed it. 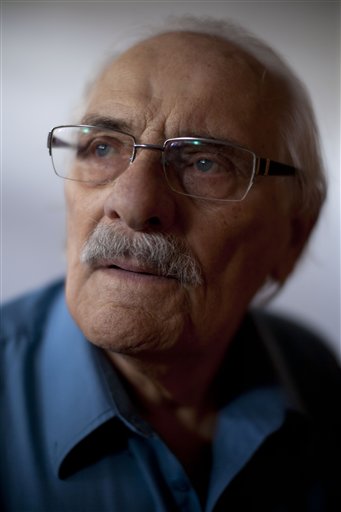 FILE — In this Oct. 31, 2010 file photo, Holocaust survivor Samuel Willenberg poses for a picture at his studio, during an interview with the Associated Press in Tel Aviv, Israel.  (AP Photo/Oded Balilty, File)

Willenberg, one of just 67 men known to have survived Treblinka after a revolt, devoted his final years to preserving the memory of more than 875,000 people systematically murdered in a one-year killing spree there at the height of World War II.

He was a frequent public speaker, wrote a book that was translated into eight languages and led dozens of youth missions to the remnants of the destroyed camp in Poland. Later in life, he took to sculpting to describe his experiences, and his bronze statues reflected what he saw — Jews standing on a train platform, a father removing his son’s shoes before entering the gas chambers, a young girl having her head shaved, and prisoners removing bodies.

“It was his life’s mission. He saw himself as the echo of the murdered, as their loudspeaker. He lived it daily and in many ways he never left Treblinka,” said Gideon Greif, chief historian of the Shem Olam institute, who knew Willenberg well. “He was committed to making sure that the voices of the victims were not forgotten … and now that personal element is gone.”

Hundreds paid homage at Willenberg’s funeral in central Israel, including dignitaries from Israel and abroad who recognized the watershed moment of his passing. In his eulogy, Israeli President Reuven Rivlin called him a “symbol for an entire generation of heroic Holocaust survivors.”

More than 70 years after the war, the window is rapidly closing on the survivors’ ability to relay their stories. Some 180,000 elderly survivors remain in Israel, with a similar number worldwide, but more than a 1,000 die each month, and experts predict that within seven years none will be well enough to share anything of significance.

That prospect has become the central challenge of Holocaust institutes around the world. An “oral history” of testimonies has been collected and filmed, original items have been restored and exhibited, and descendants are receiving training on how to carry on their parents’ stories.

“There is a huge added value to hearing survivor testimony first hand,” said Naama Egozi, a trainer of teachers at the Yad Vashem Holocaust memorial’s International School of Holocaust Studies. “You can read a book or watch a movie, but there is just no substitute to someone who can say ‘I was there.'”

Willenberg was among the most powerful of these witnesses. With a booming voice and a storyteller’s charisma, he recounted his ordeal in detail in a wide-reaching interview with The Associated Press in 2010, tearing up on several occasions.

His two sisters were murdered at the camp and he described his own survival as “sheer chance.”

“It wasn’t because of God. He wasn’t there. He was on vacation,” he said.

Along with the lesser known Belzec and Sobibor camps, Treblinka was designed with the sole intention of exterminating Jews, as opposed to others that had at least a facade of being prison or labor camps. Treblinka’s victims were transported there in cattle cars and gassed to death almost immediately upon arrival.

Only a select few — mostly young, strong men like Willenberg, who was 20 at the time — were assigned to maintenance work instead.

In all, the Nazis and their collaborators killed about 6 million Jews during the Holocaust. The death toll at Treblinka was second only to Auschwitz — a prison camp where more than a million Jews died in gas chambers or from starvation, disease and forced labor.

On Aug. 2, 1943, Willenberg joined a group of Jews who stole some weapons, set fire to the camp and headed to the woods. Hundreds fled, but most were shot and killed by Nazi troops or captured by Polish villagers who returned them.

The survivors became the only source of knowledge about Treblinka, because the Nazis all but destroyed it in a frantic bid to cover their tracks. All that remains today are a series of concrete slabs representing the train tracks and mounds of gravel with a memorial of stone tablets representing lost communities.

Willenberg was shot in the leg during the escape and kept running, ignoring dead friends in his path. He said his blue eyes and “non-Jewish” look allowed him to survive in the countryside before arriving in Warsaw and joining the Polish underground.