Last hurrah? Carson set to drop out next week - The Horn News 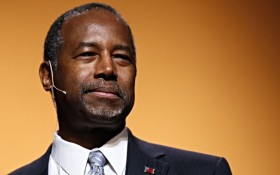 The presidential race can be a long and unforgiving process for candidates, and none are a better example of that than Dr. Ben Carson.

Facing polling number that have been struggling for months and a shrinking bank account, Carson’s campaign seems headed for heartbreak. And according to insiders, his concession could come as early as next week.

As first reported by Breitbart, Armstrong Williams — a longtime business adviser of Carson’s that worked on his campaign in 2015 — believes that Carson will drop his bid for the presidency “sooner rather than later” after failing to finish even close to a win in a single Republican primary.

And if current polls are to be believed, next week’s Super Tuesday primaries will be a disaster for Carson, leaving him unable to raise more money or credibly advance himself as a serious candidate.

In the Breitbart interview, Williams told host Stephen K. Bannon, “While we’re heading to Super Tuesday next week… he had some tough choices to make. There’s no question… You have to admit, you see the handwriting on the wall.”

“Listen, that time will come,” Armstrong added. “There’s no doubt about that. But it will be Dr. Carson’s decision and his alone. And that may happen between now, and March 2.”

March 2 is the day after Super Tuesday — and, at that point, it’s likely that voters will have made Carson’s decision for him.