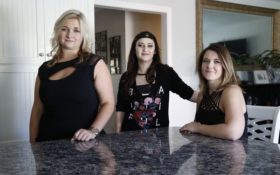 As soon as Chris Gilman knew she would survive the gunshot wound she sustained in the Las Vegas massacre, she wanted to find the two strangers who saved her life — a man and woman whose names she didn’t even know.

She found a Facebook page called “Find My LV Hero” and posted a plea.

“Looking for husband and wife who were by the VIP bleachers and helped me get out,” wrote Gilman, of Bonney Lake, Washington. “My wife gave the husband her shirt and the wife held it against my side to stop bleeding as they carried me through the VIP area out to the street.”

Despite the scant details in Gilman’s post, it worked. Three days later, Gilman connected with her rescuers, Alex and Wanda Valiente, off-duty Los Angeles County sheriff’s deputies who were at the Oct. 1 concert where a gunman opened fire from the 32nd floor of a hotel, killing 58 people and wounding hundreds.

The connection is one of about 25 made so far through the Facebook page. Nearly six weeks after the massacre, Ashton Zyer’s social media creation continues to generate new searches for heroes who in some cases saved lives and in others simply provided what comfort they could.

Zyer, a Las Vegas singer/songwriter, said she started the page after seeing several people in her large social media network post about trying to find someone.

Meghan Earley posted that she was looking for a security guard and a Las Vegas police officer who helped her escape.

“Because of their bravery I only have a sprained ankle, cuts and bruises, as well as a concussion and some broken teeth,” she wrote on Oct. 14. “You both are my heroes forever!!!”

Myrna Lopez is looking for a paramedic who gave the socks off his feet to her friend when he saw her running barefoot.

“We just wanted to find him and thank him,” Lopez wrote on Oct. 24. “We saved those socks as a reminder that God was with us that night. He clothed us when we weren’t clothed.”

Andrea Kelly, a 41-year-old nurse from Calgary in Alberta, Canada, posted last week that she was looking for a wounded young woman she can’t get her out of her mind.

As Kelly fled the gunfire with her husband, she came across the woman, who had been shot in the knee. Her foot was swelling, a sign of dangerous internal bleeding.

On the way to the hospital in the bed of a truck, Kelly, the wounded woman and both their husbands hunkered down to avoid more bullets.

“She was bawling and hyperventilating,” Kelly said. “I told her ’You’re going to be OK. We’re going to the hospital.”

After the woman was rushed into the emergency room, Kelly never saw her again. Kelly believes her name is Lindsey Chance, and is about 23 years old and from Colorado.

Although Chance’s name is not on the list of the dead, Kelley said she needs “to hear her voice.”

Lacey Tucker of Henderson, Nevada, is desperate to find the couple who helped her and her cousin and sister-in-law as the three women fled the gunfire.

Tucker had just been grazed by a bullet while shielding her cousin, and the group was hysterical over a friend they lost track of amid the chaos.

That’s when the women, all in their mid-20s, ran into a man named John and his wife, both in their early 50s. Tucker said the couple immediately went into “mom-and-dad mode.”

At one point, John locked hands with Tucker. A wave of calm came over her.

“It was the first at-peace feeling I had when he grabbed my hand,” she said. “It was like I was a little girl and my dad just found me.”

John held her hand as the group ran about 10 minutes to safety. John then told his wife to stay with the women while he ran back to the shooting scene to find their missing friend.

John found the missing woman by shouting her name in the last place her friends saw her.

Amid the tears and hugs when all were reunited, John and his wife quietly left. The women never got to say “Thank you.”

Chris Gilman said she is grateful she found the couple who helped her. Gilman’s wife of 17 years, Aliza Correa, also is thankful they found Alex and Wanda Valiente.

“I honestly believe that if it wasn’t for Wanda and Alex, I would probably be planning Chris’ funeral,” Correa said.

Gilman said she and Wanda Valiente now speak almost daily. But early on, Gilman felt a little embarrassed about how much she was contacting Valiente. Her new friend quickly put her at ease.