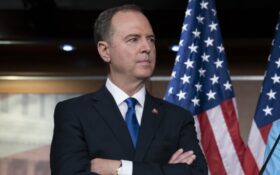 No single congressman has represented Democratic investigations of Republicans than Rep. Adam Schiff, D-Calif. — and after some of his comments from this week, maybe none has ever been so hypocritical.

The outgoing chair of House Intelligence Committee handed out more subpoenas than he could count; led the first impeachment of former President Donald Trump; and became deeply involved in House Speaker Nancy Pelosi’s committee on the Capitol riot.

But now Schiff is in hot water, and he’s talking about ducking Republican investigations… even refusing to answer legal documents requiring him to testify.

Rep. James Comer, R-Ky., will take the helm of the House Oversight Committee, and he’s promising hearings to clean house.

If Comer or any other Republican issues a subpoena for Schiff to testify about the way he used the Deep State for his own political advantage, “we will have to consider the validity of the subpoena,” said Schiff. He insisted it was Republicans who “have disrespected the law” by not complying with subpoenas. “But we will have to look at the legitimacy or lack of legitimacy of what they do,” told CNN’s “State of the Union” on Sunday.

Schiff seems to be setting himself up to ignore the rules he expected the GOP to follow when he led the intelligence committee.

After all, that’s a much different standard than Schiff held out for Republicans when he led the impeachment of the former president.

Schiff accused Trump of undertaking “an unprecedented effort to obstruct the House of Representatives impeachment inquiry and to hide it from the public and from Congress, including all evidence related to his misconduct.” That “cover-up continues today,” Schiff insisted.

What was Trump’s crime, according to Schiff? “The administration has not provided a single document pursuant to lawful subpoenas by the House,” the California Democrat said at the time.

Trump’s refusal to comply with his subpoena is “a gross abuse of power,” Schiff told Congress.

The California Democrat’s indictment of Trump mentioned the president’s avoiding subpoenas 16 times in one speech alone.

He even asked Republicans what they would say to a “president who’s from a different party who refuses the same kind of subpoenas.”

Schiff’s new line also differs significantly from his own actions during the Jan. 6 Committee’s investigations last year. He immediately slapped witnesses with subpoenas to testify before the one-party committee, whose legitimacy was so doubtful that House Republican Leader Kevin McCarthy, R-Calif., refused to participate.

Not only was the committee’s legitimacy an open question, but Schiff’s actions were a radical change from past practices and “norms.”

“It’s a sharp break from previous practices in recent House investigations, including the impeachment of Donald Trump that Schiff led in 2019, when committees gave potential witnesses weeks to voluntarily comply before issuing subpoenas,” reported Politico.

“In some cases, we’re making requests we think will be complied with,” Schiff admitted in September of last year. “In other cases, we’re going straight to subpoenas where we think we’re dealing with recalcitrant witnesses.”

But he said the change was absolutely necessary, so the Jan. 6 Committee could move with “great rapidity” and “forgo some of the time-consuming steps” every other committee managed to take.

But then, the committee drew out its hearings through prime-time proceedings, handled by a Hollywood producer, that only ended last month.

“We’re about a month away” from releasing a report, said committee chairman Rep. Bennie Thompson, D-Miss., on Wednesday.

Then again, Schiff’s shifty actions are similar to the way he acted the last time Republicans issued subpoenas to determine if he had used his office to break the law.

The reason behind those subpoenas seemed clear enough: The president seemed to think Schiff and Swalwell had been leaking classified information to the press to help their political fortunes.

“I think Adam Schiff is the biggest leaker in Washington,” Trump said in 2019. Plus, Eric Swalwell’s tarnished, personal history with a Chinese spy named Fang Fang is hardly a secret.

Issuing a secret subpoena for the two potential intelligence risks set Democrats into overdrive. “The revelation that the Trump Justice Department secretly subpoenaed metadata of House Intelligence Committee Members and staff and their families, including a minor, is shocking,” said Senate Majority Leader Chuck Schumer, D-N.Y.

Noticing a pattern? When Democrats issue subpoenas for Republicans, the process is sacred, inviolable, and above question. “Shut up and obey,” they say.

But when Republicans subpoena Democratic congressmen compromised by domestic politics or foreign spies, they’re “shocking” violations of norms. At the least, you have to carefully parse their “validity” and “legitimacy.”

The only rule for Washington Democrats seems to be hypocrisy.

But Schiff’s days of double-dealing could be coming to an end: Kevin McCarthy has promised, if he’s elected Speaker of the House, to remove Schiff—as well as Swalwell and Rep. Ilhan Omar, D-Minn.—from House committee assignments.

If Schiff is lucky, that will be the worst that happens to him.