Trump wants the USA to host the Olympics - The Horn News 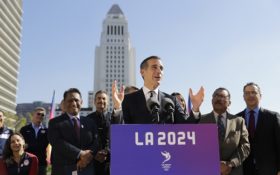 Los Angeles was all but guaranteed to be awarded a future Olympic Games on Tuesday, most likely in 2028, but the public reaction in the sports-crazed city was, well, subdued.

The privately run committee behind LA’s Olympic bid has organized dozens of flashy, celebrity-studded events to showcase public support for making Los Angeles a three-time Olympic city, after hosting the 1932 and 1984 Games.

But there were no fireworks Tuesday after the International Olympic Committee, meeting in Switzerland, voted unanimously to seek a deal to award the 2024 and 2028 Games, one to each city. Paris is widely seen as the favorite for 2024, with Los Angeles getting the runner-up prize, 2028.

“Big step forward but more work to do,” Jeff Millman, a spokesman for the group, said in an email after being asked about the absence of a public event to mark the occasion.

And the IOC won’t make a final decision until September, he added.

But there appeared to be little doubt about the significance of the vote Tuesday.

“Los Angeles is in the game as America’s team,” Los Angeles City Council President Herb Wesson said in an email.

The city’s bid committee has long argued that there is overwhelming public support for bringing the Games back to LA. It has spent millions of dollars staging events to stoke Olympic excitement, and its long list of supporters includes Kobe Bryant, swimmer Janet Evans, Venus and Serena Williams and other sports royalty.

“We have such enthusiasm in our city,” Garcetti said, speaking in Switzerland. “We are in love with the Olympics.”

The deal to divide the spoils between the two cities would fulfil a strategy the IOC set in motion last year to help safeguard a stable future for the signature Olympic event. After years of runaway spending, the two bids are seen as financially secure.

A 2028 Olympics in Southern California would be the first American-hosted games since 1996 in Atlanta.

The understated response to Tuesday’s decision is part of the long, strange journey for LA, which was once shunted aside after Boston was selected at the U.S. pick for the 2024 Games.

After being snubbed, LA was awarded the spot in September 2015, after Boston’s bid soured amid flagging public support.

“I’ve been in a few political campaigns, but this has been a long one,” Garcetti said.

LA organizers once said they were seeking only the 2024 Games. But they later signaled they would consider 2028 after it became clear the IOC wanted to make a dual award.

Garcetti sounded confident, speaking with the media. “L.A. is ready to throw these Olympics in two months, if we were asked, or two decades if it came to that,” the mayor said.