Karine Jean-Pierre left speechless by this - The Horn News 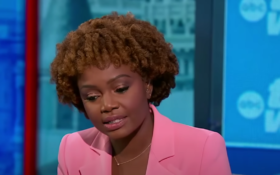 On Tuesday, the Supreme Court allowed a pandemic-era restriction on asylum-seeking illegal immigrants to stay in place for the duration of the court battle over it.

President Joe Biden has presided over more than two-thirds of the policy’s lifespan… and yet the administration is making excuses for its delayed, disorganized attempts to mitigate the border crisis before the eventual end of Title 42.

“The Supreme Court’s order today keeps the current Title 42 policy in place while the Court reviews the matter in 2023. We will, of course, comply with the order and prepare for the Court’s review,” White House press secretary Karine Jean-Pierre said in a statement.

“At the same time, we are advancing our preparations to manage the border in a secure, orderly, and humane way when Title 42 eventually lifts and will continue expanding legal pathways for immigration. Title 42 is a public health measure, not an immigration enforcement measure, and it should not be extended indefinitely. To truly fix our broken immigration system, we need Congress to pass comprehensive immigration reform measures like the ones President Biden proposed on his first day in office. Today’s order gives Republicans in Congress plenty of time to move past political finger-pointing and join their Democratic colleagues in solving the challenge at our border by passing the comprehensive reform measures and delivering the additional funds for border security that President Biden has requested.”

Amid the Jean-Pierre is blaming the congressional Republicans… who currently don’t control either chamber in Congress… and who will only control one of the two chambers next year.

The Biden administration acknowledged, “Title 42 is a public health measure, not an immigration measure, and it should not be extended indefinitely.”

Biden has occupied the White House for almost two years, and the previous administration instituted Title 42 almost three years ago. In other words, the Biden administration has enjoyed ample time to plan for the end of Title 42.

Yet, the administration failed to name an alternative, besides some platitudes like “passing the comprehensive reform measures and delivering the additional funds for border security.”

Jean-Pierre said, “We need Congress to pass comprehensive immigration reform measures like the ones President Biden proposed on his first day in office.” The Biden administration has been trying the same thing for almost two years, with little to show for it.

Still, the administration may succeed in ending Title 42 after the court battle.

The Supreme Court is currently considering a fight dating back to April 2022. At the time, the Centers for Disease Control and Prevention announced its decision to end Title 42. Some conservative-leaning states sued the federal agency, and they took their case the way to the Supreme Court.

The high court is considering a complicated, largely procedural question about the role of state intervention in federal policy.

The Biden administration still has considerable leeway to enforce Title 42 as aggressively or as leniently as it chooses. For example, when a judge ordered last year that Trump’s “Remain in Mexico” policy to make asylum-seekers wait in Mexico for hearings in U.S. immigration court be reinstated, it did so with such limited scope that it had little impact. That policy has since ended after the administration prevailed in the Supreme Court in August.

The Biden administration’s use of Title 42 includes an opaque, bewildering patchwork of exemptions that are supposed to be for migrants deemed most vulnerable in Mexico, perhaps for gender identity or sexual orientation, or for being specifically threatened with violence. U.S. Customs and Border Protection works with partners it doesn’t publicly identify and doesn’t say how many slots are made available to each.

Mexico is another wild card. The use of Title 42 to quickly expel migrants depends largely on Mexico’s willingness to accept them. Right now Mexico takes expelled migrants from Guatemala, Honduras, El Salvador and Venezuela, in addition to Mexico, but not other countries, such as Cuba. Most asylum seekers who cannot be sent to Mexico are not expelled.

Biden is scheduled to meet with Mexican President Andres Manuel López Obrador in Mexico City next month. Hopefully, Jean-Pierre will have something to announce by then.