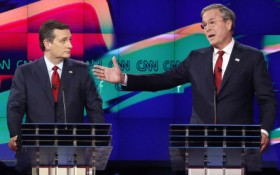 But Bush’s support may be even more trouble than it’s worth.

For months, Cruz has done everything he can to portray himself as an anti-establishment candidate — and an endorsement from an ultimate party insider like Bush is likely to raise some eyebrows among the Cruz base.

For his part, Cruz embraced Bush’s endorsement today and claimed he could build a broad coalition capable of beating former Secretary of State Hillary Clinton in the fall. But that’s only if he can climb past the surging Trump.

Bush, the former Florida governor once considered a mainstream Republican powerhouse, dropped out of the contest in February after weak showings in early primaries. “Ted is a consistent, principled conservative who has shown he can unite the party,” he tweeted. Bush added on his Facebook page that Republicans “must overcome the divisiveness and vulgarity Donald Trump has brought into the political arena” or risk losing to Clinton.

But Cruz has a long climb if he’s to catch Trump in the delegate count, and it’s even harder with Ohio Gov. John Kasich still in the hunt.

“I think he’d be a tremendous addition to an administration,” Cruz said pointedly on CNN, praising the governor’s talents while suggesting Kasich should get out of his way. Mitt Romney, the 2012 nominee and a leading anti-Trump voice, helped Cruz win Utah yesterday, a factor cited by the senator in claiming his appeal is growing beyond the very conservative and religious voters who have powered his victories in some primaries and caucuses.

The Utah victory for Cruz kept the front-runners from dominating another election night, but Trump has maintained a comfortable lead in the race for delegates who decide the presidential nominations.

Trump’s brash tone appeared to turn off some Republican voters in Utah, where Cruz claimed more than half of the caucus vote — and with it, all 40 of Utah’s delegates.

Yet that wouldn’t make up for Trump’s haul in Arizona, where he earned the state’s entire trove of 58 delegates.

The win in Arizona gave Trump a little less than half of the Republican delegates allocated so far. That’s still short of the majority needed to clinch the nomination before the party’s national convention this summer.

However, Trump has a path to the nomination if he continues to win states that award all or most of their delegates to the winner, which means Cruz needs to turn things around soon if he’s going to win without help from a brokered convention.