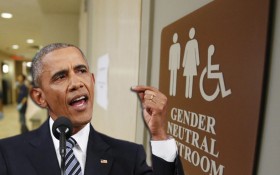 For much of President Barack Obama’s eight years in office, his administration has been heavily criticized for what opponents say is frequent federal overreach and increasingly liberal demands.

Could this be Obama’s most heavy-handed example?

According to the White House, public schools must permit transgender students to use whatever bathroom and locker rooms they claim match their gender.

The Obama administration directive was issued amid a court fight between the federal government and North Carolina.

The guidance from leaders at the departments of Education and Justice says public schools must treat transgender students in a way that matches their gender identity — even if their education records or identity documents indicate a different sex.

In issuing the guidance, the Obama administration is pushing the federal government into a socially divisive debate that is being waged at the state level. The Justice Department on Monday sued North Carolina over a bathroom access law that it said violates the rights of transgender people, a measure that Lynch said was as bad as racial segregation.

However, critics noted that the guidance does not impose any new legal requirements. But officials say it’s meant to threaten school districts that receive funding from the federal government.

Under the guidance, schools are told that they must treat transgender students according to whatever gender they choose, as soon as a parent or guardian notifies the district that that identity “differs from previous representations or records.” There is no obligation for a student to present any kind of medical diagnosis or identification documents that reflect his or her gender identity.

There is no room for complaints from other students, either. Equal access must be given to transgender students even in instances when it makes others uncomfortable, according to the directive.

The administration is also releasing a separate 25-page document of questions and answers about best practices, including ways schools can go out of their way to make transgender students comfortable in the classroom.

The guidance comes days after the Justice Department and North Carolina filed dueling lawsuits over a new state law that says transgender people must use public bathrooms, showers and changing rooms that correspond to the sex on their birth certificate. The administration has said the law violates the Civil Rights Act.

North Carolina Gov. Pat McCrory has argued that the state law is a “commonsense privacy policy” and that the Justice Department’s position is “baseless and blatant overreach.” His administration sued the federal government hours before the state itself was sued.