Hope for ending of hostile relations with N. Korea? - The Horn News 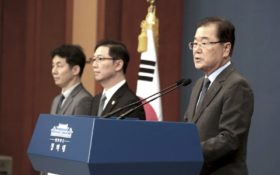 North Korean leader Kim Jong Un still has faith in U.S. President Donald Trump’s commitment to ending their nations’ hostile relations, but he’s frustrated by questions about his willingness to denuclearize and wants his “goodwill measures” to be met in kind, South Korean officials said Thursday.

The trove of comments from Kim, including his commitment to a nuclear-free Korean Peninsula and to the suspension of all future long-range missile tests, were relayed by top South Korean security officials returning from meeting him in Pyongyang as well as by the North’s propaganda specialists.

Even in their indirect form, each statement will be parsed for clues about Kim’s mindset as North Korea and the U.S. move forward with efforts to resolve a nuclear standoff that just a year ago many feared could lead to war. Some of his reported comments were reiterations of past stances, but there will be sharp interest in whether they push negotiators back to diplomacy after recriminations that followed Kim and Trump’s June summit.

Since then, neither side has seemed willing to make a substantive move, leading to skepticism over Trump’s claims that Kim will really dismantle his nuclear weapons program. Recent satellite photos have indicated Kim’s weapons factories were still operating to produce fissile materials to make nuclear weapons.

South Korean officials said they forwarded a message from Trump to Kim during their meeting and would send a separate message from Kim to Trump later Thursday. The officials wouldn’t discuss the content of the messages.

Chung Eui-yong, Moon’s national security adviser and the head of the South Korean delegation to Pyongyang, said Kim told him that he still had faith in Trump despite diplomatic setbacks. He said Kim emphasized that he has not once talked negatively about Trump to anyone, including his closest advisers.

Trump responded Thursday by tweeting, “Kim Jong Un of North Korea proclaims ‘unwavering faith in President Trump.’ Thank you to Chairman Kim. We will get it done together!”

Chung reported that Kim said he wishes for North Korea and the U.S. to put an end to their seven decades of hostile relations before the end of Trump’s first term.

Kim, however, expressed to Chung that he was frustrated by skepticism in the international community over his commitment to denuclearization.

Kim also said an end-of-war declaration that Seoul and Pyongyang have been pushing Washington to sign off on wouldn’t weaken the U.S.-South Korean alliance or lead to the withdrawal of the 28,500 U.S. troops stationed in South Korea to prevent North Korean attack, according to Chung.

South Korea’s liberal government is keen on keeping engagement with North Korea alive. The delegation to the North announced that they had set up a summit for Sept. 18-20 in Pyongyang between the North Korean leader and South Korean President Moon Jae-in, their third meeting since April.

That summit will be a crucial indicator of whether larger nuclear negotiations with the United States will proceed. Moon is seen as eager to keep the diplomacy alive in part so that he can advance his ambitious engagement plans with the North, which would need U.S. backing to succeed.

The inter-Korean summit would come just before a gathering of world leaders at the United Nations in New York at the end of September, but Seoul said Thursday that it was unlikely Kim would attend. Seoul has indicated an interest in Kim and Trump meeting in New York, and Trump, who is facing growing domestic turmoil, has hinted that another summit could happen.

U.N. Secretary-General Antonio Guterres welcomed Kim’s commitment to realize the denuclearization of the Korean Peninsula and “commends the continued momentum and efforts by both Koreas to further trust-building and reconciliation,” U.N. spokesman Stephane Dujarric said.

He said the U.N. chief “looks forward to further progress at the inter-Korean summit later this month towards sustainable peace, security, and complete and verifiable denuclearization of the Korean Peninsula.”

While pushing ahead with summits and inter-Korean engagement, Seoul is trying to persuade Washington and Pyongyang to proceed with peace and denuclearization processes at the same time so they can overcome a growing dispute over the sequencing of the diplomacy.

Seoul and Pyongyang both want a declaration to formally end the 1950-53 Korean War, which ended in an armistice. U.S. officials have insisted that a peace declaration, which many see as a precursor to the North eventually calling for the removal of all U.S. troops from the Korean Peninsula, cannot come before North Korea takes more concrete action toward abandoning its nuclear weapons.

Such steps may include providing an account of the components of its nuclear program, allowing outside inspections and giving up a certain number of its nuclear weapons during the early stages of the negotiations.

While an end-of-war declaration wouldn’t imply a legally binding peace treaty, experts say it could create political momentum that would make it easier for North Korea to steer the discussions toward a peace regime, diplomatic recognition, economic benefits and security concessions.

The North’s Rodong Sinmun newspaper on Thursday said Washington must discard its “stubborn” stance that the North must denuclearize first before the United States agrees to a peace treaty. The article said the North has shown “goodwill and generosity” through actions such as returning U.S. war remains and dismantling a nuclear testing ground, but that the U.S. has failed to respond similarly.

After their June summit in Singapore, Trump and Kim issued a vague statement about a nuclear-free peninsula without describing when and how it would occur. Post-summit nuclear negotiations between Washington and Pyongyang were rocky and quickly settled into a stalemate.

Speaking Thursday in India, Pompeo said the U.S. will continue to work with North Korea to “deliver for the world” in upholding U.N. Security Council resolutions against its nuclear and missile programs, and the commitment Kim made at his June summit with Trump on denuclearization. Pompeo declined to talk about what he described as “ongoing negotiations” with the North Koreans.

“It is the case that there is still an enormous amount of work to do,” Pompeo told a news conference in New Delhi. “We haven’t had any nuclear tests, we haven’t had any missile tests, which we consider a good thing. But the work of convincing Chairman Kim to make the strategic shift that we’ve talked about for a brighter future for the people of North Korea continues.”

The State Department also announced Thursday that its new special envoy for North Korea policy, Stephen Biegun, would be traveling to South Korea, China and Japan next week, his first assignment since his appointment last week as point-man for diplomatic efforts with Pyongyang.

In a move that will irk North Korea, the U.S. Justice Department in Washington was preparing Thursday to announce charges against a North Korean in connection with the hack of Sony Pictures Entertainment in 2014, according to a U.S. government official familiar the criminal case.

U.S. officials believed the Sony hack was retribution for “The Interview,” a comedy film that starred Seth Rogen and James Franco and centered on a plot to assassinate Kim.