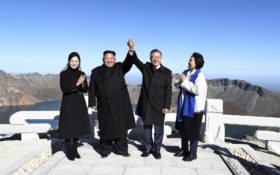 Moon told reporters in Seoul that he will carry a private message from Kim for Trump on the nuclear standoff when he meets with the U.S. president in New York next week on the sidelines of the U.N. General Assembly session.

Moon faces increasing pressure from Washington to find a path forward in efforts to get Kim to completely — and unilaterally — abandon his nuclear arsenal.

Moon, who set up the June summit in Singapore between Trump and Kim and is eager for another to happen, also told reporters that he’ll convey to Trump his and Kim’s desire to get a declaration on ending the Korean War by the end of this year.

The war still technically continues because it ended with a cease-fire, not a peace treaty. Such a declaration would be the first step toward a formal peace treaty, but many in the United States are worried that it could result in Kim pushing for the removal of U.S. troops stationed in South Korea to deter the North.

Earlier Thursday, Kim and Moon took to the road for the final day of their summit, hiking to the peak of Mount Paektu with their hands clasped and raised in a pose of triumph. Their trip to the mountain on the North Korean-Chinese border, and the striking photo-op that will resonate in both Koreas, followed a day of wide-ranging agreements on Wednesday they trumpeted as a major step toward peace.

However, their premier accord on the issue that most worries the world — the North’s pursuit of nuclear-tipped missiles capable of striking as far as the U.S. mainland — contained a big condition: Kim stated that he would permanently dismantle North Korea’s main nuclear facility only if the United States takes unspecified corresponding measures.

The leaders are basking in the glow of the joint statement they signed Wednesday. Compared to the vague language of their two earlier summits, Kim and Moon seem to have agreed on an ambitious program meant to tackle soaring tensions that caused many to fear war last year as the North tested a string of increasingly powerful weapons.

But while containing several tantalizing offers, their joint statement appeared to fall short of the major steps many in Washington have been looking for — such as a commitment by Kim to provide a list of North Korea’s nuclear facilities, a solid step-by-step timeline for closing them down, or an agreement to allow international inspectors to assess progress or discover violations.

It also was unclear what “corresponding steps” North Korea wants from the U.S. to dismantle its nuclear site.

The question is whether it will be enough for Trump to pick up where Moon has left off. Trump told reporters Wednesday that the outcome of the summit was “very good news” and that “we’re making tremendous progress” with North Korea. He didn’t indicate in his brief remarks whether the U.S. would be willing to take further steps to encourage North Korean action on denuclearization.

“We have agreed to make the Korean Peninsula a land of peace that is free from nuclear weapons and nuclear threat,” Kim said Wednesday as the two leaders announced their agreement. “The road to our future will not always be smooth and we may face challenges and trials we can’t anticipate. But we aren’t afraid of headwinds because our strength will grow as we overcome each trial based on the strength of our nation.”

Moon urged unity for all Koreans in a speech he gave Wednesday night to the crowd gathered for North Korea’s signature mass games. “I now propose that we completely eliminate the hostility of the past 70 years and take a big step forward in peace so that we can become one again.”

According to a statement signed by the countries’ defense chiefs, the two Koreas agreed to establish buffer zones along their land and sea borders to reduce military tensions and prevent accidental clashes. They also agreed to withdraw 11 guard posts from the Demilitarized Zone by December and to establish a no-fly zone above the military demarcation line that bisects the two Koreas that will apply to planes, helicopters and drones.

Other agreements aimed at removing some longstanding irritants from their relations, such as allowing more contact between families divided by the Korean War. Moon also appeared to be making good on his proposals to help build up the North’s infrastructure and open cross-border rail links.