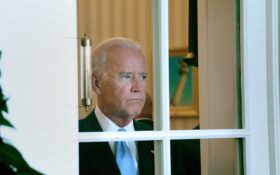 And neither one picked up the phone.

The Wall Street Journal reports that both Saudi Arabia and the United Arab Emirates declined calls from Biden as war in Ukraine and sanctions on Russia caused already-high gas prices to jump to record levels.

“There was some expectation of a phone call, but it didn’t happen,” an unnamed U.S. official told the newspaper. “It was part of turning on the spigot [of Saudi oil].”

The Journal said the two nations spoke to another world leader instead: Russian President Vladimir Putin.

The growing rift appears to be tied to several issues.

The Journal notes that Saudi Arabia wants more support against Iran, as well as more support for their actions in the growing civil war in neighboring Yemen.

They’re also believed to be seeking legal protections for Crown Prince Mohammed bin Salman, who is being sued in the U.S. for his alleged role in the 2018 murder of journalist Jamal Khashoggi.

Multiple reports say the killing was orchestrated by the crown prince.

But there may also be something more: Payback.

During Democratic primary debates in 2019, Biden said there’s “very little social redeeming value in the present government in Saudi Arabia.” And in 2020, the Journal notes, he said he would treat Saudi Arabia as a “pariah” state due to the Khashoggi killing.

Now, Saudi Arabia may be sending a message back – not just to hurt Americans, but specifically Biden and his party. High gas prices are threatening any dim hopes they have of clinging to control over Congress in November’s midterm elections.

Biden may be desperately trying to change his tune as a result.

Axios reports that Biden may resort to a humbling “hat-in-hand trip” to Saudi Arabia in a last-ditch effort to improve relations in hopes they’d agree to increase production.

Biden has portrayed the rising fuel prices as Putin’s fault.

“Putin’s war is already hurting American families at the gas pump,” he said this week. “Since Putin began his military buildup on Ukrainian borders — just since then — the price of the gas at the pump in America went up 75 cents.”

But the attack on Ukraine is only part of the reason for the latest spike, as fuel prices were rising well before any global tensions.

“Don’t be fooled,” Senate Minority Leader Mitch McConnell, R-Ky., told reporters. “This was more than a year in the making.”

“Keep in mind, gas prices are high now, before they banned Russian gas,” he told The Washington Post Wednesday. “So I wouldn’t suddenly start blaming high gas prices upon this measure.”

The Biden administration at the time blamed the increase on the end of the pandemic and the return of more normal pricing.

However, that’s well above the $2.50 per gallon average in January 2020, before the coronavirus shutdowns led to plunging fuel prices.

Now, Biden is reportedly turning to pariah states for help – including Iran and Venezuela.

That has Republicans incensed, especially given that he has yet to turn to the nearest option of all for a quick increase in supply: the United States itself.

Comments like that, the liberal network said, could “haunt vulnerable Democrats all the way to November.”