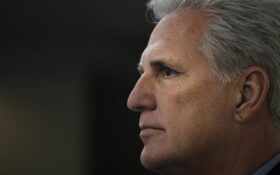 On Tuesday, Congress starts its new term, with the Republicans set to hold a House majority for the first time in four years.

Before anything else, the House must pick a House speaker, and longtime House GOP Leader Kevin McCarthy, R-Calif., is running for the position.

In other words, McCarthy — a favorite of the Republican establishment — is headed for the biggest embarrassment of any party leader in the last century.

So far, McCarthy has failed to win over a pivotal — and potentially growing — group of lawmakers led by the conservative House Freedom Caucus, despite weeks of closed-door meetings. Nearly a dozen Republicans have publicly raised concerns about McCarthy.

“Kevin McCarthy doesn’t have the 218 votes to be speaker,” Rep. Scott Perry, R-Pa., the chairman of the Freedom Caucus, said in an interview with The Associated Press. “Unless something dramatically changes, that’s where we’re going to be.” In the recent past, some representatives have become House speaker with fewer than 218 votes, due to other representatives absences or abstentions.

A sizable but less vocal group of McCarthy supporters started its own campaign, “Only Kevin,” as a way to shut down the opposition and pledge their support only to him.

Some Republicans simply want to elect some speaker — any speaker — by the end of the day on Jan. 3.

“It would be nice if we can be ready to go on Jan. 3,” said Rep. Jim Jordan, R-Ohio, who is set to become chairman of the House Judiciary Committee. “But you know, if it doesn’t happen on the first ballot, that’s when that just pushes things back.”

The chamber cannot organize until it has a speaker since that person effectively serves as the House’s presiding officer and the institution’s administrative head. The House can elect a new speaker at any time if the person occupying that role dies, resigns or is removed from office. Barring that, a speaker is normally elected at the start of a new Congress.

Lawmakers call out the name of their choice for speaker from the floor, a rare and time-consuming roll call that heightens the drama on the floor. Members often liven up the proceedings by shouting or standing when casting their vote.

One core ask from the holdouts this time is that McCarthy reinstate a rule that allows any single lawmaker to make a “motion to vacate the chair” — in short, to call a vote to remove the speaker from office.

Pelosi eliminated the rule after conservatives used it for leverage over the preceding House Speaker John Boehner. McCarthy agreed to add it back in — but at a higher threshold, requiring at least five lawmakers to sign on to the motion.

“I will work with everyone in our party to build conservative consensus,” McCarthy wrote in a weekend letter to colleagues.

As McCarthy convened a New Year’s Day conference call with Republican lawmakers to unveil the new House rules package, Perry dashed off a fresh letter of concerns signed by eight others Republicans that the changes do not go far enough.

It remains unclear who could successfully challenge McCarthy.

Rep. Bob Good, R-Penn., promised a viable challenger by the second ballot. He faced pushback from a Fox News interviewer, who asked for Good to identify the possible challenger.

Ahead of tmrw's GOP Speaker election, Rep. Bob Good (R-PA) says Kevin McCarthy is "part of the swamp cartel" and 10-15 Republicans will vote against. He says a "true" conservative will appear on the second ballot.

Fox's Griff Jenkins isn't buying it: "You don't have a name." pic.twitter.com/U7UhnxaH3J