Kerry: US opposes all kinds of torture - The Horn News 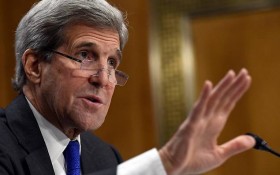 Secretary of State John Kerry has a message to the world: The U.S. opposes torture.

Seeking to remove even a “scintilla of doubt” about American values, Kerry says the U.S. rejects torture in any form, at any time, by any government or group.

Kerry didn’t mention Republican presidential candidates Donald Trump by name, but noted public statements by what he referred to as other Americans.

Trump has advocated a return to waterboarding and other harsh interrogation techniques.

The Obama administration considers waterboarding torture. And CIA Director John Brennan, a past defender, told NBC this week the agency wouldn’t use the practice even if ordered by a future president.