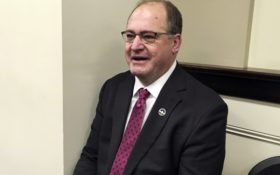 Kentucky’s Republican House speaker resigned his leadership post, declaring he did not want the secret sexual harassment settlement he signed to be a distraction from the chamber’s legislative work.

But moments into his announcement Monday, he said the state’s Republican governor was spreading lies about him from the “deepest pits of Hell” and vowed to expose those he says orchestrated his demise, “regardless of who they are and the position they hold.”

While Jeff Hoover will no longer lead the House of Representatives, he still has a seat in the chamber’s back row, where he plans to be a vocal member of the Republican majority. Meanwhile, eight of his Republican colleagues have filed formal disciplinary charges against him and have asked a special committee to recommend the House remove him from office.

“Of course (it will be a distraction.) How could it not be?” asked Republican Rep. Phil Moffett, one of the eight GOP members who signed the charges against Hoover. “It’s only logical to say once this issue is behind us completely, it will not be a distraction anymore.”

Kentucky lawmakers have plenty of work to do. They must fill a nearly billion-dollar budget hole that could require massive spending cuts since the conservative body is averse to tax increases. They have to find a solution for a public pension system that is one of the worst funded retirement plans in the country. And they have to repair a broken leadership structure that has left the House divided.

“I will not deny that the dazzlement of scandals and rumors and drama pulls focus from our primary tasks,” GOP state Rep. Jill York said. “But as far as knocking anyone off stride in what they came down here to do … I’m doing what I’m supposed to be doing. I’m filing bills.”

With his wife watching from the balcony, Jeff Hoover acknowledged to colleagues that he sent inappropriate but consensual text messages to a woman who once worked for the House Republican Caucus. Those text messages, according to formal disciplinary charges filed against him in the House, included a request for the woman to send photos of herself wearing a “black lace g string.” Hoover said his behavior was not “unwelcome” by the woman, but he agreed to pay her an undisclosed financial settlement after her attorney sent him a letter claiming sexual harassment.

Hoover and others have refused to discuss details of the settlement, citing a confidentiality clause. The Associated Press has not identified the woman because she says she is a victim of sexual misconduct. Her attorney declined to comment.

Hoover had announced he would resign as speaker in November, just days after the Courier Journal exposed the secret sexual harassment settlement signed by him and three other Republican lawmakers. But instead, when the House convened Monday to begin the 2018 legislative session, he temporarily ceded power to Osborne, sowing confusion among the 100-member body about who was really in charge.

Hoover’s resignation was made on the condition “if accepted by the members of the House.” Speaker Pro Tem David Osborne quickly ruled the resignation had been accepted and ordered it entered into the House journal. He said a vote would only be required if a House member objected, and none did.

Osborne said he will continue to preside as House speaker pro tem until his term expires at the end of the year. House members won’t elect a new speaker until January 2019.

“It has not slowed down our work. We have continued to work,” Osborne said. “The pace of activity will quicken over the next few days.”