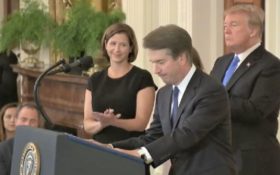 The mainstream media has been in a frenzy ever since California Sen. Dianne Feinstein dropped a controversial letter accusing Supreme Court nominee Brett Kavanaugh of sexual misconduct.

Just days before Kavanaugh was to be confirmed, allegations that Feinstein had been holding onto since July were released. It has caused a media circus — but it’s Kavanaugh’s wife’s latest move that left reporters speechless.

How did Ashley Kavanaugh react to this?

She got the army of reporters staking out her house a batch of cupcakes and shared them.

“Per our CBS News cameraman at Kavanaugh’s house, his wife handed out cupcakes from Sprinkles to any of the photogs and producers who wanted them,” CBS News’ Kathryn Watson tweeted.

Despite the media hounding her husband over unproven sexual assault claims, Mrs. Kavanaugh remained a poised and gracious host — and a strong mother.

The constroversial media stakeout “seems unlikely to generate real news. It is likely, however, to traumatize Kavanaugh’s children: 10-year-old Elizabeth and 13-year-old Margaret. That’s why Ashley Kavanaugh’s bravery is such an important part of this story,” PJ Media wrote Tuesday. “A constant media stakeout in front of the house may put the girls on edge, as it seems their every step is being watched by a hostile press ready to jump on any horrible story about their father it can find.”

“In this context, Ashley Estes Kavanaugh went out with cupcakes. This showed the girls — and the world — that the Kavanaughs are not afraid of the besieging hostile press. Instead, the mother of the house extended hospitality to them, bringing them cupcakes — and iconic cupcakes at that,” PJ Media wrote.

Of course, you won’t see that on the cable news.