Kavanaugh's young daughters rushed from room after... - The Horn News 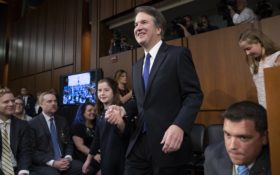 For thirty minutes, angry protests and shouting disrupted the start of the Senate’s confirmation hearings for Supreme Court nominee Brett Kavanaugh on Tuesday. Angry Democrats and alt-left protesters were so disruptive and obscene, Kavanaugh’s two young daughter had to be rushed out of the hearing room.

Democrats raised objections from the moment Chairman Chuck Grassley called the committee to order. Grassley denied multiple requests to postpone. He said the chaotic scene was something he’d “never gone through” in 15 past confirmation hearings. Republicans called it a scene of “mob rule.”

More than two dozen protesters, shouting one by one, disrupted the hearing at several points and were removed by police. “This is a mockery and a travesty of justice,” shouted one woman. “Cancel Brett Kavanaugh!” Others shouted against the president or to protect abortion access. “Senators, we need to stop this,” called out one.

Struggling to speak over protesters, Utah Sen. Orrin Hatch, Republican, said: “These people are so out of line they shouldn’t be in the doggone room.” As patience thinned and tempers flared, Texas Sen. John Cornyn, Republican, denounced what he called the “mob rule.”

He was invited to introduce his parents, wife and children, before the outbursts made it necessary to escort them out of the room.

One insider explained,“It was very unpleasant for young children.”

In prepared opening remarks, Kavanaugh declared he would be even-handed in his approach to the law. He promised to be a “team player” if confirmed, declaring that he would be a “pro-law judge” who would not decide cases based on his personal views.

“A good judge must be an umpire, a neutral and impartial arbiter who favors no litigant or policy,” Kavanaugh said.

“I would always strive to be a team player on the Team of Nine,” he said.

Kavanaugh, 53, has served for the past 12 years on the federal appeals court in Washington, D.C., which is considered the second most important court after the Supreme Court. His conservative record includes a dissenting opinion last year that would have denied immediate access to an abortion for an immigrant teenager in federal custody.

As a young lawyer, Kavanaugh worked for Justice Anthony Kennedy, whom he would replace. Kennedy retired at the end of July.

Questioning of Kavanaugh will begin Wednesday, and votes in committee and on the Senate floor could occur this month. Kavanaugh could be on the bench when the court begins its new term on Oct. 1.

Grassley has called Kavanaugh “one of the most qualified nominees ever picked for the court.”

The American Bar Association has given Kavanaugh its highest rating, well qualified.