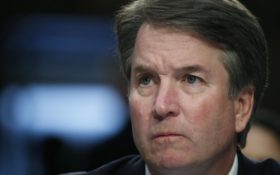 The accusations against Supreme Court nominee Brett Kavanaugh turned explosive Tuesday — and it has Republican leaders throwing up their hands.

Christine Blasey Ford, the accuser, is demanding the FBI investigate her allegations before she agrees to testify under oath at a Senate Judiciary Committee hearing next week, her lawyer said in a letter to the panel. Critics say Ford’s attorney, Deborah Katz, is heavily involved in liberal activism.

Judiciary Committee Chairman Chuck Grassley responded to the letter and made it clear to Ford that Monday will be her only chance to testify. “Nothing the FBI or any other investigator does would have any bearing on what Dr. Ford tells the committee, so there is no reason for any further delay,” Grassley said.

Ford’s lawyer appeared on CNN to announce that the accuser is “not prepared to talk in public on Monday.”

An FBI investigation “should be the first step in addressing the allegations,” the lawyers wrote in the Tuesday letter, which was obtained by The Associated Press.

The FBI has denied the request for an investigation into the accusation.

President Donald Trump has also rejected the idea of bringing in the FBI to reopen its background check of Kavanaugh. In the past few years, Kavanaugh has gone through at least six background checks.

In a tweet Tuesday night, Trump wrote: “The Supreme Court is one of the main reasons I got elected President. I hope Republican voters, and others, are watching, and studying, the Democrats Playbook.”

Ford’s sudden accusations against Kavanaugh came at the perfect time for Democrats, critics say. 35 years after the alleged incident, Ford comes forward with claims from a high school party – just in time for Kavanaugh’s confirmation to be impacted.

Sen. Dianne Feinstein, Democrat, had possession of the letter from Ford in her possession since July and even had a one-on-one meeting with Kavanaugh, but never mentioned the letter.

Feinstein is also demanded Tuesday that the confirmation of Kavanaugh be delayed until an FBI investigation is concluded — a process that could take months. So why speak out now?

Senate Majority Leader Mitch McConnell slammed Feinstein for keeping the letter “secret until the 11th hour.” Senator Kevin De Leon, who is challenging Feinstein in the Nov. 6 election, said her actions amounted to a “failure of leadership.”

Republicans say Ford will have one chance to testify, and one chance only.

“Monday is her opportunity,” McConnell said Tuesday. McConnell expressed confidence that Kavanaugh would be confirmed: “I’m not concerned about tanking the nomination.”

Grassley said the committee offered Ford “the opportunity to share her story” in a public or a private hearing, or staff interviews, “whichever makes her most comfortable. The invitation for Monday still stands.”

Republicans have stressed that they are willing to move Monday’s hearing behind closed doors, if she prefers.

“Were planning on a hearing Monday. It can be open. It can be closed, whatever Ms. Ford wants,” said Sen. John Kennedy, a member of the Judiciary panel from Louisiana. “We’re ready to hear anything she has to say. I am, anyway, and I think most of us are.”

One witness the Democrats want to hear from is Kavanaugh’s high school friend Mark Judge, who Ford said was in the room when she was assaulted. Kavanaugh has denied Ford’s allegation, and Judge says he doesn’t remember any such thing.

“More to the point, I never saw Brett act in the manner Dr. Ford describes,” Judge said in a letter to the panel.

Republicans said late Tuesday they were considering hiring outside attorneys, presumably including women, to question the witnesses. But that may be unncessary if Ford declines to appear.

The No. 2 Senate Republican leader, John Cornyn of Texas, noted that Ford has admitted she doesn’t remember some details of what happened. He called the allegations a “drive-by attack” on Kavanaugh’s character.

“There are gaps in her memory,” Cornyn said. “She doesn’t know how she got there, when it was and so that would logically be something where she would get questions.”

The Associated Press and The Horn News‘ Kylie Handler contributed to this report.