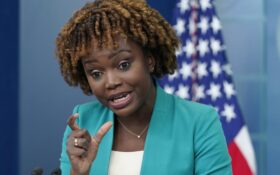 And 2 questions really stunned Jean-Pierre during a recent press conference.

It’s no wonder that Biden has been struggling with low approval.

One reporter asked Jean-Pierre about the timeline of the classified documents… only for Jean-Pierre to refuse any answer.

“The president addressed this issue yesterday. He addressed it in Mexico City on the world stage, with many of you, at a press conference,” Jean-Pierre said, deflecting. “He was surprised to learn any records had been found there. He doesn’t know what was in them. He said this. I’m just repeating what the president has said. As soon as his lawyers realized the documents were there, they did the right thing and immediately turned them over to the Archives… We are committed to doing the right thing, doing this in the right way, and we will provide further details when it’s appropriate.”

“You mentioned you wanted to do this the right way. Presumably, that means the transparent way,” the reporter hit back. “My question was: When was the president briefed. He said he was briefed. When did that briefing happen?”

“These documents were discovered on Nov. 2. This didn’t become public until my colleague, CBS News, reported this on Monday. That’s more than two months later,” the reporter pressed. “Why was the public not informed while the White House prepared a P.R. response for two months?”

“Again, this is under review by the Department of Justice,” KJP said, seemingly unable — or unwilling — to answer the questions directly. “It is, again, an ongoing process. We’re going to respect the process.”

Jean-Pierre neglected to explain why a Justice Department review would prevent her from talking about this scandal.

While visiting the border, Biden appears to have sidestepped any signs of illegal immigration.

Fox News White House correspondent Peter Doocy asked why… only for Jean-Pierre to dismiss the premise of his question.

“Why didn’t president Biden want to see what’s really going on at the border?” Doocy asked. “He didn’t talk to any migrants, and he didn’t go anywhere that people actually cross illegally. Why not?”

Jean-Pierre argued that Doocy was overstating the extent of the border crisis.

“He did see exactly what’s going on at the border,” Jean-Pierre said. “He went to the migrant center, which is a critical place to be, when you think about our partners who are helping support the migrants on the ground there. There happened to be no migrants at the facility at the time that he visited.”

“El Paso is being crushed. The shelters are full,” Doocy responded. “And it’s just a coincidence that suddenly the president shows up and?…”

“[The strain on El Paso’s human services] did go down significantly prior to the president’s visit by about 70 percent. That’s a good thing,” Jean-Pierre claimed. “It has helped ease pressure all across the community, but the president’s visit had nothing to do with it. He went to a migrant center. He went to one of the busiest ports of entry, which is in El Paso… You saw him meet with CBP. You saw him meet with the partners on the ground.”