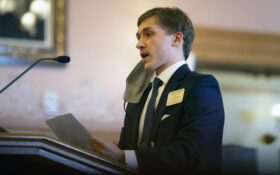 Aaron Coleman, a Democratic state representative from Kansas, was arrested Saturday on suspicion of drunk driving.

The 21-year-old lawmaker has now been arrested twice since his election in 2020, and he is facing a new wave of calls to resign.

Coleman attracted national attention last year for his troubled history. In 2015, he was charged with criminal threat and pleaded guilty to criminal harassment, a misdemeanor.

On several occasions, he has quietly deleted controversial, antagonistic tweets.

Since taking office, he has continued this erratic behavior.

Last month, he smacked, pushed, and spit on his 18-year-old brother for planning to be baptized, according to court documents. He was later arrested for domestic battery and directed to a mental health examination.

Coleman left the jail on bond, and then he was arrested again for this alleged D.U.I.

If found guilty, Coleman would face at least 48 hours in jail or 100 hours of community service. He would also have violated his bond by consuming alcohol.

Since the arrest, Kansas House Speaker Ron Ryckman, a Republican, has urged Coleman to resign.

“Mr. Coleman’s actions continue to be a detriment to himself and others, and most importantly to the people who elected him to represent them,” Ryckman, a Republican, said in a text message to The Kansas City Star on Sunday. “I hope constituents recognize this and that Mr. Coleman will step down to get the services he needs.”

“I want to reiterate what I have said in the past.” Sawyer began. “He should resign and concentrate on getting the help he so badly needs. The stress of the legislature is not a healthy environment for someone in this mental state.”

“Mr. Coleman’s most recent arrest is further evidence that he is not fit to serve in the Kansas House of Representatives and that his continued presence in the Legislature is a disservice to his constituents,” Kelly said in a statement to the Star.

The Kansas House can expel Coleman, in addition to waiting for his resignation. Expulsion requires only a two-thirds majority.