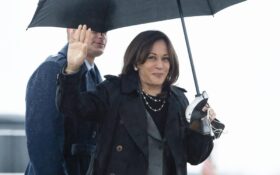 Over two million refugees have fled Ukraine amid the horror of the continent’s first land invasion since World War II, according to the United Nations. Russian dictator Vladimir Putin’s unprovoked invasion has brought massive amounts of suffering, death, and terror to millions more innocent civilians.

Not to worry, the White House sent an envoy: Vice President Kamala Harris.

The vice president is set to travel to Poland on Wednesday… but her trip went awry before even leaving Washington.

Harris is heading into the trip among unexpected diplomatic turbulence over fighter jets.

The Polish government on Tuesday came out with a plan to transfer its Russian-made MiG-29 fighter planes to a U.S. military base in Germany, with the expectation that the planes would then equipped and given to Ukrainian pilots trying to fend off Russian forces. In turn, the U.S. would supply Poland with U.S.-made jets with “corresponding capabilities.”

But the Poles allegedly didn’t run that idea past the Biden administration before going public with it, and the Pentagon quickly dismissed the idea as not tenable. Warplanes flying from a U.S. and NATO base into airspace contested with Russia would raise the risk of the war expanding beyond Ukraine.

Poland’s Prime Minister Mateusz Morawiecki on Wednesday stressed that Poland’s support to Ukraine has been defensive and that any decision whether to make the MiG-29 planes available to Ukraine would be up to the U.S. and NATO — and then only if all nations agreed.

“Poland is not a side in this war,” he said, adding, “Such a serious decision like handing over planes must be unanimous and unequivocally taken by all of the North Atlantic Alliance.”

The plane issue provided a rare moment of disharmony in what has been a largely united effort by NATO allies to assist Ukraine without getting embroiled in a wider war with Russia.

And it meant Harris was flying into fractious terrain Wednesday as she opens a two-day visit to Poland and Romania and tries to give our allies confidence in American leadership.

Harris is expected to continue talks with the Poles about getting fighter jets to the Ukrainians during her visit to Warsaw, according to a senior administration official who previewed the trip for the Associated Press on the condition of anonymity. The matter remains a priority to the Biden administration, the official added.

On Wednesday, White House Press Secretary Jen Psaki said Harris’ trip was unrelated and the issue of planes would be “worked through military channels.”

Harris is slated to meet on Thursday with Polish President Andrzej Sebastian Duda and Prime Minister Mateusz Morawiecki as well as with Ukrainians who have fled to Poland. She’ll also meet with Canadian Prime Minister Justin Trudeau while in Warsaw. Trudeau has been in Europe this week meeting with Ukraine allies.

Harris will travel on Friday to Bucharest, where she’s to meet Romanian President Klaus Iohannis.

The vice president also is expected to use the meetings in Poland and Romania to underscore the U.S. commitment to the NATO alliance and the need for continued humanitarian and military assistance for Ukraine. She’ll also highlight the need for allies to continue their close coordination.

“The vice president’s trip to Poland and to Europe is part of our effort to show our strong support for our NATO allies and partners, the security assistance they’ve been providing, their role in accepting and welcoming refugees from Ukraine,” White House press secretary Jen Psaki said.

As vice president, Harris has been representing the U.S. on international trips. Previously, she spent most of her career in state and local governments. She hardly touched foreign policy before arriving at the Senate in 2017.

On the campaign trail for president, she faced criticism for her lack of experience with this issue.

“Kamala Harris is not qualified to serve as commander in chief and I can say this from a personal perspective as a soldier,” former Rep. Tulsi Gabbard, D-Hawaii, said of Harris on Fox Sports radio in 2019. “She’s got no background or experience in foreign policy and she lacks the temperament that is necessary for commander in chief.”

Perhaps unsurprisingly, Harris has bungled some of her previous assignments in foreign nations, despite her record on the powerful Senate Intelligence Committee.

During a trip to Guatemala, she faced backlash for telling would-be migrants, “Do not come.” Later, she visited southeast Asia, and her trip devolved into bedlam due to a scare over the so-called “Havana syndrome.”

Since then, she has boosted her foreign policy reputation slightly. In Paris, she addressed the French president’s concerns about a defense contract involving submarines. Most recently, she also received a warm reception at the Munich Security Conference in February, and she met with leaders in Europe three times in the last month.

Harris has “really been immersed in this issue,” a senior administration official told CNN. The official recalled seeing Harris “working intensively on a daily basis on all of the issues that are related to the ongoing crisis resulting from the Russian invasion.”

Still, Harris has also faced ridicule for her messaging about the Russo-Ukrainian War. Earlier this month, she uttered the infamous lines: “Ukraine is a country in Europe. It exists next to another country called Russia. Russia is a bigger country.”