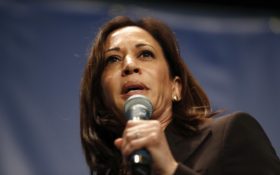 Vice President Kamala Harris has been hemorrhaging staffers over the last couple months.

In December, she lost her former Communications Director Ashley Etienne and former Chief Spokesperson Symone D. Sanders. On Tuesday, she lost Vince Evans, her deputy director of public engagement and intergovernmental affairs… after only a year.

Place your bets on how long Simmons last!

Simmons ascended through Washington, and in 1992 he became a press assistant on the campaign on former President Bill Clinton.

At one point, he also left the Clinton administration to work at two large, multinational investment banks.

The Hill reported Simmons’ arrival first, and CNN confirmed the news later that day by tapping a White House official.

One insider told The Hill that Simmons would “really change things up.”

Harris is apparently trying to overcome an extremely high turnover rate, but she has yet to announce replacements for other, more senior staffers like Sanders. In fact, the vice president started the year without a chief spokesperson.

Harris has lost seven top staffers in total since her botched trip to Guatemala last June.

Last month, CNN asked Harris about the meaning of all these resignations. Harris declined to respond and then said, “Next question!”

It’s an embarrassing subject… but Harris can’t hide it.