Kamala Harris is hiding, says... who!? - The Horn News 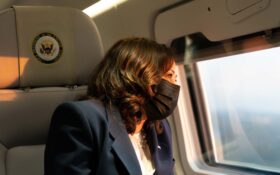 Where in the world is Vice President Kamala Harris?

Since returning from her ill-timed trip to Southeast Asia, Harris has been suspiciously quiet — and critics are asking questions.

Has anyone seen Kamala Harris?

Lara Trump says she knows why Harris is hiding: She’s trying to distance her political brand from the Afghanistan fiasco.

“She wants nothing to do with this situation because she knows as we all do this is a stain on America, it will stay forever and I guess she’s just trying to run out the clock on this thing, and think we’ll all forget about it,” she told Fox News last week.

“We will not forget about it, Kamala Harris,” she said.

“We have seen what you have done in this situation and it’s absolutely nothing.”

The fact that Kamala Harris is silent right now tells me she knows the jig is up on her leadership skills.

Has Harris been a strong leader?

Or do you disapprove of her job so far?

Do you approve of Kamala Harris' job performance?