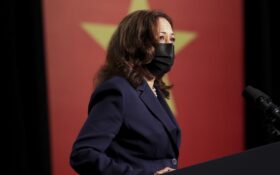 Vice President Kamala Harris and the Biden administration have seen their struggling poll numbers plummet deep into the negative in recent days.

After the disastrous withdrawal from Afghanistan that has trapped Americans and thousands of our Afghan allies behind Taliban lines, American voters, Republican lawmakers, and even Biden’s Democratic allies have expressed anger and frustration at the White House.

And Kamala Harris’ latest blunder links the Biden administration to yet another huge Vietnam War mistake.

Harris was photographed posing in front of a statue of the infamous North Vietnamese communist leader Ho Chi Minh on Wednesday at the Hanoi Presidential Palace.

Ho Chi Minh and his communist Vietcong guerrilla forces were responsible for the death of over 58,000 American soldiers — not to mention the over 300,000 wounded in action.

It was a scene reminiscent of actress Jane Fonda smiling on a North Vietnamese anti-aircraft gun — Harris, the United States Vice President posing and grinning in front of the statue of a communist leader responsible for the deaths of thousands of American servicemen. 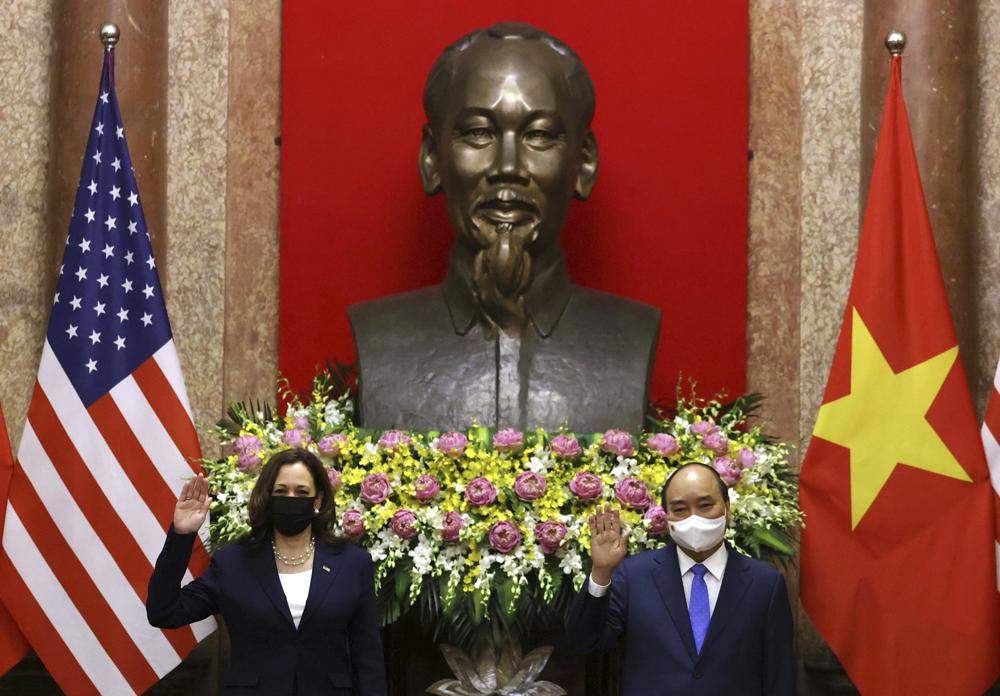 The vice presidential blunder comes in the middle of Harris’ weeklong tour of Southeast Asia, a trip that brought her to Singapore and Vietnam in a bid to strengthen U.S. ties to the Indo-Pacific region to counter China’s growing military and economic influence there.

In addition to her commitment to defend the South China Sea against Beijing advances, Harris unveiled an array of new partnerships and support for Vietnam in areas including climate change, trade, and the coronavirus pandemic.

She announced that the U.S. will send 1 million additional doses of the Pfizer vaccine to Vietnam, bringing the total U.S. vaccine donation to Vietnam to 6 million doses.

The U.S. will also provide $23 million to help Vietnam expand distribution and access to vaccines, combat the pandemic and prepare for future disease threats. The Defense Department is also delivering 77 freezers to store vaccines throughout the country.

The new U.S. aid to Vietnam includes investments to help the country transition to cleaner energy systems and expand the use of electric vehicles, and millions in aid to clear unexploded weapons left over from the Vietnam War.

That U.S. war has returned to the spotlight over the past week as the U.S. struggles with a similarly messy end to the Afghanistan War. Images of the evacuation of Kabul, as the Taliban took full control of Afghanistan, evoked similar shots of U.S. helicopters lifting off from the U.S. Embassy in Saigon decades prior, prompting comparisons between the two failed wars.

On Wednesday in Vietnam, however, Harris referenced the progress the two former foes have made, telling Vietnam’s president that “our relationship has come a long way in a quarter of a century.”

She also embraced elevating the relationship with Vietnam from a comprehensive partnership to a strategic partnership, a diplomatic designation that would reflect the deepening ties between the two countries.

After her meetings, Harris took a moment of silence in the pouring rain and laid flowers at the monument where John McCain’s plane was shot down by the North Vietnamese in 1967. She noted it was the third anniversary of Sen. McCain’s death.