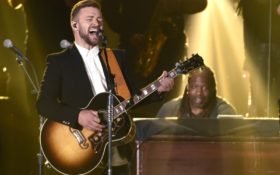 A watchdog group is politely pleading with Justin Timberlake to keep his Super Bowl halftime show “safe for the children watching.”

In an open letter to the entertainer issued Tuesday, the Parents Television Council hopes there isn’t a repeat of what happened in 2004 when Timberlake ripped Janet Jackson’s costume to reveal her right breast.

The group writes that it hopes Timberlake will keep the halftime show “friendly and safe” for the children watching, especially since some will want to emulate the singer.

Timberlake has assured viewers “That won’t happen this time.”

The infamous wardrobe malfunction drew CBS a $550,000 fine from the Federal Communications Commission that was later overturned.

The watchdog group says it wants “a positive, uplifting and entertaining halftime show on Sunday.”