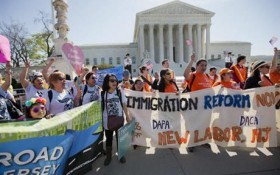 The Supreme Court appeared divided between its liberal and conservative justices Monday over President Barack Obama’s immigration programs that could affect millions of people who are in the country illegally.

The administration’s best hope for a favorable ruling after 90 minutes of arguments at the high court appeared to rest with Chief Justice John Roberts. Roberts asked questions suggesting he could side with the administration if there were a small change in the proposed programs.

The administration is asking the justices to allow it to put in place two programs that could shield roughly 4 million people from deportation and make them eligible to work in the United States.

Texas is leading 26 states dominated by Republicans in challenging the programs that Obama announced in 2014 and that have been put on hold by lower courts.

The programs would apply to parents whose children are citizens or are living in the country legally. Eligibility also would be expanded for the president’s 2012 effort that applies to people who were brought here illegally as children. More than 700,000 people have taken advantage of that earlier program, Deferred Action for Childhood Arrivals. The new program for parents, known as Deferred Action for Parents of Americans, and the expanded program for children could reach as many as 4 million people, according to the nonpartisan Migration Policy Institute.

The fate of the programs could hang on a two-word phrase the administration used to describe the status of immigrants under the programs— lawful presence. Texas and congressional Republicans who back the state say the phrase is important because it gives the immigrants more rights than federal law allows.

Solicitor General Donald Verrilli Jr. told the justices that they could get rid of that phrase and essentially leave the programs unchanged. “If the court wants to put a red pencil through it, that’s totally fine,” Verrilli said.

Later in the arguments, Roberts sounded interested in that idea, asking lawyer Erin Murphy if the court could, in fact, just “cross it out.”

If the court is split ideologically, the case could end in a 4-4 tie following Justice Antonin Scalia’s death in February. That would leave the programs in limbo, almost certainly through the end of Obama’s presidency.

Both sides acknowledge that the outcome of the presidential election could determine the programs’ fates, even if the Supreme Court rules for the administration. Republican candidates have pledged to roll back Obama’s actions, and Republican candidate Donald Trump has proposed deporting the roughly 11 million people who are living in the U.S. illegally.

As arguments began, hundreds of pro-immigration demonstrators filled the sidewalk in front of the court and spilled into the street, leading police to close the road to traffic. Demonstrators held signs that read “Keep Families Together” and chanted “Si se puede,” which is Spanish for “Yes we can.”

A group of demonstrators opposing Obama’s action held signs saying the president had overstepped his authority.

The high court is expected to decide by late June whether the efforts can move forward in the waning months of Obama’s presidency, amid a presidential campaign that has been marked by harsh Republican rhetoric over immigration.

Republican governors and members of Congress have argued that Obama doesn’t have the power to effectively change immigration law. When he announced the measures 17 months ago, Obama said he was acting under his own authority because Congress had failed to overhaul the immigration system.

The administration and its supporters said the challenged programs do not offer blanket protection, but depend on case-by-case reviews. The protection from deportation also would be temporary, for three years.