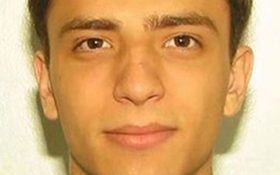 A Mississippi man who tried to travel to Syria with his fiancee to join the Islamic State group was sentenced Wednesday to eight years in prison on federal terrorism charges.

U.S. District Judge Sharion Aycock sentenced Muhammad Dakhlalla after he pleaded guilty in March to one count of conspiring to provide material support to a terrorist organization. He was also sentenced to 15 years of probation.

His fiancee, Jaelyn Young, was sentenced earlier this month to 12 years in prison and 15 years’ probation, including mandatory mental health treatment.

Prosecutors have portrayed Young, who converted to Islam while studying at Mississippi State University, as the mastermind who talked Dakhlalla into going along. However, prosecutors said, Dakhlalla ultimately agreed to the plan.

Young and Dakhlalla are among a number of people arrested nationwide for Islamic State sympathies. Like many, they developed views supporting the Islamic State in part by watching online videos and were arrested after making their own social media posts that attracted the attention of the FBI.

The two were arrested in August 2015 before they could board a flight from Columbus, Mississippi, with tickets for Istanbul purchased using Young’s mother’s credit card without permission. Authorities said the couple had contacted undercover federal agents posing as IS contacts in May, seeking online help in traveling to Syria. Both have remained jailed in Oxford, Mississippi, since their arrests.

Dakhlalla is a 2015 psychology graduate of Mississippi State University who grew up in the college town of Starkville. His father, a native of Bethlehem, West Bank, is a prominent figure in the town’s Muslim community and an occasional prayer leader at the mosque across the street from the family’s house. His mother, a New Jersey native, ran a restaurant and later sold hummus in local farmers markets. Dakhlalla is the youngest of three sons and was preparing to start graduate school in psychology at Mississippi State when he was arrested.

Prosecutors say Young, who converted to Islam at Mississippi State, began to view Islamic State fighters as liberators. They said Young approvingly cited a video showing militants throwing a man accused of being gay off a roof to his death, and also expressed approval of a gunman’s shooting attack on five members of the U.S. military in Chattanooga, Tennessee, in 2015.

“Young continually asked Dakhlalla when they were going to join (the Islamic State group) and began to express hatred for the U.S. government and to express support for the implementation of Sharia (sic) law in the United States,” prosecutors wrote.

By May 2015, she had begun seeking advice online on how to travel to Syria, eventually making contact with undercover FBI employees, according to prosecutors.

Young told the undercover FBI employees that she and Dakhlalla would like to be medics treating the wounded. Dakhlalla, in online contacts, said he was good with computers and media and wanted to contribute to the Islamic State’s struggle. Court papers say Dakhlalla said online that he wanted to become a soldier, writing “I am willing to fight. I want to be taught what it really means to have that heart in battle!”

At one point, Young said she planned to camouflage the couple’s journey as a honeymoon, but later dropped that idea.

The FBI said Dakhlalla and Young both expressed impatience with how long it was taking for them to be issued passports, and the charges say Dakhlalla paid $340 to expedite passport processing on July 1. Both Young and Dakhlalla left farewell letters telling their families they would never return.

At her sentencing, Young broke down in tears, saying she finds what she did “surreal,” adding she felt shame over her actions and sorrow for the humiliation she caused her family. She and her parents told the judge that Young had turned to Islam amid an emotional crisis.